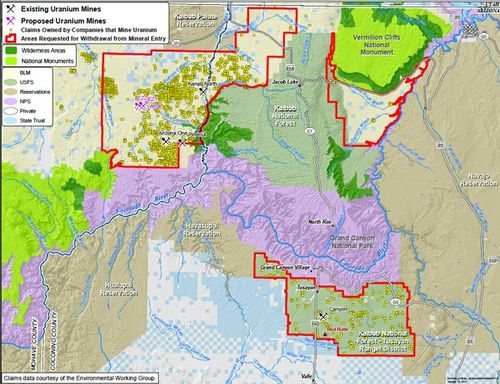 On Tuesday, Arizona federal district court judge David G. Campbell dismissed claims by several mining associations, Utah and Arizona counties, and the Nuclear Energy Institute, seeking to set aside the Obama Administration’s January 9, 2012 withdrawal of over one million acres of federal lands surrounding Grand Canyon National Park from uranium mining.  This decision  protects the Colorado River watershed and several Havasupai sacred sites from the direct and indirect impacts of uranium mining by preventing the development of thousands of claims that have been located on federal lands near the park since the latest spike in uranium prices in 2004.  The Center for Biological Diversity, along with the Grand Canyon Trust, the Havasupai Tribe, the National Parks Conservation Association, and the Sierra Club all intervened in support of Interior’s withdrawal.

In their appeal to the district court, the plaintiffs, American Exploration & Mining Association, Gregory Yount, the Nuclear Energy Institute, the National Mining Association, the Arizona Utah Local Economic Coalition, and Quaterra Resources, Inc., raised claims under NEPA, FLPMA, and the Establishment Clause. First, they argued that BLM violated NEPA by failing to consult with local governments, and by failing to address “scientific controversies” in the final Environmental Impact Statement.  Noting that the BLM had given two of the counties cooperating agency status during the EIS process, and that the agency gave ample opportunity for the plaintiffs to appear and consult at “two public scoping meetings, five meetings with cooperating agencies, and three meetings or hearings with the [counties] specifically,” the court ruled that BLM had provided more than adequate opportunity to consult.   Moreover, BLM had included the results of several county studies on the proposed withdrawal in both the draft EIS and the final EIS, and had reconciled any scientific discrepancies regarding location and quantity of uranium reserves consistent with NEPA’s requirements. 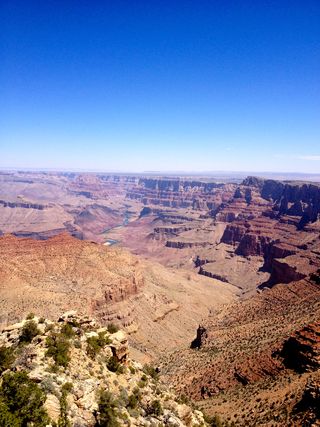 Second, the plaintiffs argued that the BLM’s withdrawal was for an “invalid purpose” under FLPMA because the record did not support the BLM’s stated reasons for the withdrawal, which included uncertainty regarding the impacts of uranium mining on water resources.  Also, they argued that BLM had unlawfully considered the impact of mining activity on cultural and tribal resources, the need for further study on wildlife impacts, and the existence of valid claims within the withdrawal area not affected by the action. The court disagreed, finding that although there was some uncertainty in the record about how mining might impact water, wildlife, and other resources, “DOI decided to err on the side of protecting the environment,” satisfied the requirements of FLPMA section 204.  This precautionary approach was supported by the NEPA Record of Decision, which showed uranium and arsenic in soil and water samples taken in the vicinity of several active mining sites, as well as trace amounts of iron, lead, manganese, radium, sulfate and uranium.

The plaintiffs also argued that the final EIS undervalued the uranium deposits in the withdrawn sections because it included valuations based on a 1990 USGS study, which violated FLPMA’s requirement that a withdrawal “fully disclose the value of minerals to be closed to development.”  The court disagreed, holding that it was acceptable for the agency to engage USGS experts to adjust the 1990 predictions, without conducting on-the-ground surveys of the million acres proposed to be withdrawn.  Noting that “nothing in FLPMA or its implementing regulations requires that the estimate be exact,” the court deferred to the agency’s determination of the most accurate scientific estimates regarding in-ground uranium reserves.

Third, one of the plaintiffs argued that the cultural resource justification for the withdrawal violated the Establishment Clause of the First Amendment because it elevated Havasupai religious concerns above other, secular interests. Applying the test from Lemon v. Kurtzman, the court held that the purpose of the withdrawal was secular, and there was “no record evidence” demonstrating any religious purpose.  In response to an argument that the withdrawal process gives Native American governments “veto power” to prohibit certain land uses and “creates a preference for American Indian religious activities” on federal lands, the court held that the withdrawal did not primarily affect Havasupai religious interests, but instead, primarily affected uranium mineral resources.  Also, the court found that nothing in the withdrawal process elevated Native American influence over the federal government’s management of the area in question above other interests.

In sum, this decision supports a precautionary approach to mineral withdrawals.  It affirms the agency’s choice, “when faced with uncertainty due to a lack of definitive information, and a low risk of significant environmental harm,” to temporarily withdraw land from mineral entry before conducting a NEPA review.  Although this may run counter to the general policy underlying NEPA, in this instance, BLM’s action prevented the development of thousands of uranium claims until the agency could fully study the impacts of those claims and determine whether to make a full withdrawal.  As the district court noted, if the BLM waited to act until after the NEPA review process was complete, the claims may have become vested and at that point, it would have been too late to protect the Colorado River watershed and the Havasupai sacred sites.