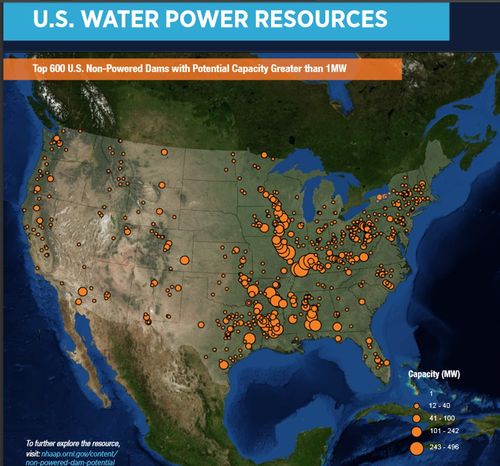 Last year, the Department of Energy published a short pamphlet on the future of hydropower in the United States.  The pamphlet contains this graphic, which shows sites where existing dams and waterworks have significant hydropower potential but don't actually produce hydropower.  From an environmental perspective, those are very promising sites; the environmental consequences of adding hydropower to an existing dam or lock compare rather favorably to the consequences of building a new dam--or fossil fuel power plant.

What's particularly striking about the graphic is where the greatest potential is concentrated: near the heart of coal country.  Why does that matter?  On Monday, EPA released its proposed CAA section 111 rules covering greenhouse gas emissions from electrical generating units.  The proposed rules would impose statewide limits but would leave states with flexibility to decide on their approach to meeting those limits.  One possible approach, which EPA specifically notes in the proposed rule, is to switch from carbon-intensive energy sources, like coal, to energy sources that with lower carbon intensity.  Given its current availability and price, natural gas is one likely beneficiary of the new rules.  But this map shows that coal country has another intriguing alternative.

Listed below are links to weblogs that reference Coal, the Proposed Section 111 Rules, and Hydro:

Interesting. Though as an aside consider that the map’s potential hydropower references may appear near the heart of coal burning country; yet those references are not anywhere near the heart of coal country. Campbell County, WY sources 42% of the nation’s coal. The nation’s coal mining epicenter moved west years ago. Eastern coal succumb to mulling the foresight of Jevons 1866 book to his Englishmen, The Coal Question: an Inquiry Concerning the Progress of the Nation, and the Probable Exhaustion of our Coal Mines.

Interestingly, many of those large circles are actually navigational locks. When the Army Corps built them, it just wasn't focused on hydropower. The story here provides a little bit of historical background: http://www.eenews.net/stories/1059963923.

Interesting. Any thoughts on why the non-powered dams are clustered in the Mississippi Basin?