The End of the Road for R.S. 2477 Claimants in Canyonlands National Park On April 25, the Tenth Circuit issued a decision in San Juan County v. United States, which will hopefully be the court's last word in the fight over access to Salt Creek Canyon in Canyonlands National Park.  For years, hikers and archaeology buffs have urged the Park Service to close a rough jeep trail in the canyon to off-road vehicle users who want to drive to Angel Arch, a unique rock formation located nine miles up the canyon (the map below, which shows the trail, comes from the Tenth Circuit's decision, and the image at left comes from wikimedia commons). There are also several archaeological sites, known as cliff dwellings, in caves in the canyon walls. The Park Service initially closed the road to the general public in the late 1960s, but over the years it has allowed limited vehicle use, which has resulted in over a decade of litigation involving the meaning of the National Park Service Organic Act's "no impairment" standard as it relates to vehicle traffic on a primitive route in a National Park. 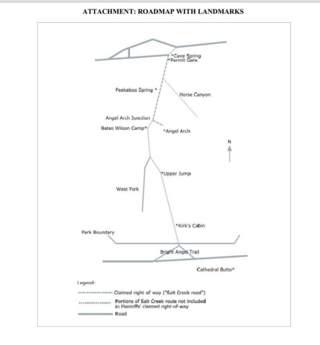 The recent litigation involving access has centered around Revised Statute 2477, or R.S. 2477, which is a powerful vestige of the General Mining Law of 1866, allowing anyone to construct "highways" for "public use" across unreserved federal public lands.  Courts have held that an R.S. 2477 right of way vests upon acceptance, which is basically use, of the highway, but to date, they have liberally construed the term highway to include dirt cow paths, seasonal off road vehicle routes, and the like.  Although the Federal Land Policy and Management Act (FLPMA) repealed R.S. 2477 in 1976, it preserved all "valid existing rights." Thus, an R.S. 2477 right of way may be valid today if it vested prior to 1976.
The April 25 decision is notable for several reasons, the first of which is that the Tenth Circuit continues to strengthen the standard for proving "acceptance" of an R.S. 2477 right of way. After this decision, R.S 2477 claimants will have to show that use of the claimed right of way was "continuous" in the sense that the alleged roads were "public thoroughfares," as opposed to seasonal routes used by hunters, ranchers, or jeep enthusiasts. This will be helpful to those defending federal title to these alleged routes because many of them are unpaved, and located in places where spring runoff and winter snow prevent year-round access. 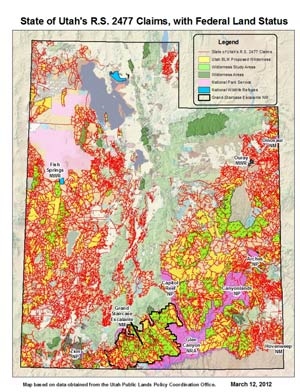 Also, and critically, the court rejected the counties' assertion that state law should determine the entire scope of an R.S. 2477 rights of way, holding that state law has provided "convenient and appropriate principles" for determining the scope and validity of an R.S. 2477 right of way, but it can be dismissed when it "contravenes congressional intent."  Lastly, the court rejected the claimants' argument that using Salt Creek road to access grazing allotments could satisfy the "use" element of an R.S. 2477 claim because that use was authorized by federal grazing permits. So, in essence, ranchers holding permits couldn't assert their permitted use of federal lands as an element of what is essentially an adverse possession claim against the federal government, which makes sense.
It is worth noting that, although this decision strengthens the standard, there are over 20 pending R.S. 2477 cases in the federal district of Utah alone, representing claims to over 45,000 acres of "roads," which the attached map demonstrates.  Many of these routes cut through National Parks, public domain lands managed by the BLM, and National Forests, so there will no doubt be future litigation as counties in Utah and other western states continue to press their claims in federal court.
You can access the decision here. For more on R.S. 2477 litigation in Utah, click here.
- Hillary Hoffman

Listed below are links to weblogs that reference The End of the Road for R.S. 2477 Claimants in Canyonlands National Park: