Stormwater, Point Sources, and the Importance of Getting Terms Right

In the last few weeks, I’ve seen several reports and articles, some written by prominent people (I’m not naming names) that contain some version of this basic description of the Clean Water Act:

This might seem surprising, because people constantly refer to urban runoff as non-point source pollution—without any acknowledgment that the statement isn’t categorically correct.  But a simple comparison of a photograph and a statutory definition ought to illustrate why that’s wrong.  What you see below is how most of our urban stormwater ultimately gets into waterways, and it sure looks like a point source to me (and, more importantly, to EPA, where people understand quite well what is and isn't a point source). 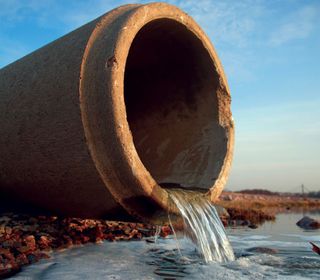 Clean Water Act Section 502(14): The term “point source” means any discernible, confined and discrete conveyance, including but not limited to any pipe, ditch, channel, tunnel, conduit, well, discrete fissure, container, rolling stock, concentrated animal feeding operation, or vessel or other floating craft, from which pollutants are or may be discharged. This term does not include agricultural stormwater discharges and return flows from irrigated agriculture.

Why does this matter?  I think there are several reasons.  First, any attorney who believes urban stormwater runoff is all non-point source pollution is going to have some embarrassing moments in practice.  When your municipal client asks, “so why do we have an MS4 permit?” or when your industrial client says “so we don’t need to comply with our general stormwater permit?”, you’ll either quickly realize you misunderstood the Clean Water Act or you’ll give some very bad advice.  More generally, figuring out what to do about urban stormwater is a big, big challenge, and it’s difficult to address that challenge if a common starting point is a misunderstanding of the Clean Water Act.  If you believe that all urban runoff is non-point source runoff, then a logical conclusion is that reforming urban stormwater management is inextricably linked to TMDL reform, which, sadly, may be a tall order.  You wouldn’t even realize the possibility that reforming NPDES stormwater permitting is both possible and, perhaps, promising.

Listed below are links to weblogs that reference Stormwater, Point Sources, and the Importance of Getting Terms Right:

I know I made this mistake and definitely benefited from you pointing it out to me!