Water, Whooping Cranes, and the ESA

Three weeks ago, a federal district court in Texas issued an important ESA decision.  The Aransas Project v. Shaw also is a very long decision—124 pages, to be exact—so I’ve been a bit slow to get a blog post up.  Despite its daunting length, the case is important reading for anyone interested in water management or the ESA.  It’s also a rather intriguing case study of the use—both successful and badly botched—of expert testimony in environmental litigation. 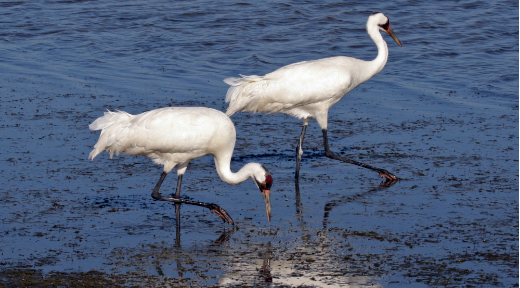 The case arises out of water management controversies in Texas.  According to the plaintiffs, the Texas Commission on Environmental Quality and its fellow defendants had taken whooping cranes in violation of section 9 of the Endangered Species Act.  They had done this, the plaintiffs argued, by allowing excessive water withdrawals from the river systems that feed into the Aransas National Wildlife Refuge, which provides vital whooping crane habitat.  The court agreed, enjoined the issuance of new water permits, and ordered the defendants to prepare a habitat conservation plan and seek an incidental take permit.

That’s a very interesting outcome, because successful section 9 actions against water managers don’t seem to be particularly common.  I haven’t done any sort of rigorous survey, but my impression, based on working as a water lawyer and then on my academic research into related ESA questions, is that environmental groups have gained much more leverage through ESA section 7.  Indeed, in the Southeast’s longstanding Apalachicola-Chattahoochee-Flint controversy, similar take claims brought against upstream water managers failed.  See Alabama v. Army Corps of Engineers, 441 F. Supp. 2d 1123 (N.D. Ala. 2006).

So could this case signal the emergence of a new front in the ESA/water allocation wars?  My suspicion is that several factors will make these plaintiffs’ success difficult to replicate.  In no particular order, those factors are:

The extraordinary level of data available to the plaintiffs in this case.  Reading the opinion made me wonder if these whooping cranes are one of the most carefully observed wild animal populations on earth.  As the court describes, scientists have been counting whooping cranes since the 1950s.  Since the early 1980s, scientists—including one of the plaintiffs’ experts—have conducted dozens of monitoring flights every year.  The resulting level of information is exceptional.  Usually population biologists must rely on some combination of observational data (usually limited), proxy indicators like habitat conditions, and computer-based modeling to assess the status of a population.  The resulting uncertainties can limit plaintiffs’ ability to demonstrate causal relationships with enough certainty to support a successful ESA section 9 claim.  With whooping cranes, the circumstances are quite different.

The imbalance of experts.  The plaintiffs had an impressive array of experts on their side.  Here’s the court’s description:

At trial, TAP presented seventeen witnesses, ten of whom were experts, GBRA eight; SARA one: and TCEQ two.   As will be discussed in more detail later, TAP’s experts were world renowned in their respective fields.  Several of TAP’s witnesses hold endowed chairs at prestigious universities, some are MacArthur Fellows, all have published numerous scientific papers in respected journals.  Indeed, one witness, Dr. Ronald Sass, is a shared recipient of the 2007 Nobel Peace Prize for his environmental work.  TAP’s crane experts… have years of study in the field and have devoted their time and energies to the survival of the AWB species.  All of TAP’s experts were accepted as such and the Court finds their testimonies compelling and credible.

The court had less laudatory things to say about the defendants’ experts.  For example:

Dr. Slack did not personally spend any significant amount of time in the field, averaging one day per year over the past fifteen years.  Contrary to the scientific literature, Dr. Slack testified that cranes did not need freshwater because they had functioning supraorbital salt glands which allowed them to secrete excess salt.  However, when questioned further by the Court, Dr. Slack admitted that he had no observational basis for this statement, he had not reviewed literature on cranes and freshwater, and that he “just made it up.” (record citations omitted)

The level of judicial interest.  From the outset, the narrative structure of the opinion (yes, it does have a narrative structure) strongly suggests that someone in the court’s chambers cared very deeply about this case, and probably also about whooping cranes.  Before getting into the procedural history, relevant law, or even the identities of the parties, the opinion spends several pages describing the whooping crane die-off, much like a detective novel beginning with the key murder.  But the real tip-off comes later, in a remarkable passage debunking the work of one of the aforementioned Dr. Slack’s graduate students:

[A key defense report] used a report by Dr. Slack’s graduate student Danielle Greer whose conclusions to the preferred food of whooping cranes was (sic) based on 90 plus hours of video of three crane areas.  The Court watched all of the videos and finds that they were either too blurred to see anything or non-demonstrative of any habit, feeding or otherwise.

So what does this all suggest?  If I’m reading correctly, it shows that when plaintiffs have extraordinarily good monitoring data, an all-star team of experts, poorly prepared experts on the other side, and a judicial chambers where someone—perhaps the judge, more likely a clerk—cares so deeply that she is willing to watch 90 hours of blurry footage of whooping cranes, they can win an ESA section 9 case against upstream water managers.  Absent those circumstances, the challenge might be a bit harder.  That doesn’t mean there won’t be other cases like this.  Conflicts between water withdrawals and the needs of endangered fish and wildlife probably aren’t going away any time soon.  But the case does illustrate the level of scientific and legal work necessary for plaintiffs to prevail.

Listed below are links to weblogs that reference Water, Whooping Cranes, and the ESA:

Interesting commentary, although as someone who has successfully brought section 9 suits to enforce the ESA, my view is that that plaintiff conservation groups in these types of suits routinely have more credible and better prepared experts simply because independent wildlife biologists (i.e., academics or field researchers with no vested interest in the outcome of the lawsuit) -- who are more likely to persuade courts -- rarely side with defense teams in these suits, but rather with the conservation groups because conservation groups will rarely bring these types of cases without strong facts and science on their side. Further, because these very rare section 9 cases are much more compelling to judges and their law clerks than the normal federal docket, my experience is that they really delve into the issues because it is new and interesting. A good example of this is Animal Welfare Institute v. Beech Ridge Energy, 675. F. Supp. 2d 540 (D. Md. 2009) where a judge invested himself in a trial, carefully sifted through an incredible amount of scientific evidence and live testimony, and ultimately made similar credibility determinations concerning experts as in the TAP case.

Awesome report Dave Owen, very well written and so true. TAP and all who worked along with them on this case did an outstanding job and one that will be remembered and studied as a textbook example of doing it the right way! As a Texas resident, I'm more than a little embarrassed that TCEQ, GBRA and even the AG's office are refusing to accept the verdict. But I am convinced that Judge Jack's excellent ruling will hold firm and the Whooping Cranes along with the Aransas Bay area will be protected. Hope this type of protection for water flows to bays and estuaries will continue in Texas. I will remember those fighting against fair water allocation when it comes time to vote! Thanks again Mr. Owen, great article!

I spent a lot of my professional career working on this crane for the End. Sp. program of the US FWS. I wrote the Critical Habitat designations and was a major editor of the early recovery plans for this species. Thus, I have some vested interest in seeing how this case was resolved. I suspect that the conclusions of this review are correct...it will be tough to get as many experts on another end. sp. as in this case, as well as a court who is very interested in the subject species. Would like to think all E/T species have such friendly courts and experts waiting in the wing.....

Thanx for the review of this case.