Emerging Issues in the Arctic

(This series of guest posts will track emerging issues in the Arctic. Big thanks to the editors at Environmental Law Prof blog for the opportunity to share my thoughts on and impressions of goings-on at the world’s “last frontier.”)

As this blog’s readers are probably aware, climate change is causing significant reductions in both the extent and the thickness of Arctic sea ice. With these reductions a number of long-imagined economic opportunities are becoming realities. Summer shipping routes are opening up along Russia’s Arctic coast (the Northern Sea Route) and across the top of Canada and the U.S. (the Northwest Passage). Oil and gas accounting for an estimated 25% of the world’s untapped reserves are becoming accessible for offshore drilling. Tourist cruises to the North Pole, Greenland, Svalbard, the Canadian Arctic and elsewhere are increasing. Looking forward, the most remote fisheries are going to be fished. Deep sea mining beds are going to be mined. Massive deepwater ports will be built in towns you’ve never heard of. And all of this is happening against the backdrop of international negotiations over who owns what under the United Nations Convention on the Law of the Sea (UNCLOS), super hi-tech sea floor mapping, war games staged by national militaries in frozen landscapes, under-ice intelligence operations, and the complicated responses from indigenous peoples across the Arctic Circle who risk losing their traditional ways of life yet stand to make a lot of money.

So there’s plenty of action in the Arctic these days, and an increasing awareness of what is at stake. Whether you see the Arctic as a frontier to be explored in the name of science or adventure or self-reinvention, a periphery from which to extract natural resources to serve those who live closer to the center of civilization, or a romantic wilderness to preserve for the good of wildlife, future generations, and the planet as a whole, the battle is on. Decisions made in the coming years—even in the coming months—will set the terms for what happens in the region for generations to come.

Recently, I attended a fascinating conference hosted by the Fletcher School of Diplomacy at Tufts University, titled “Voyage of Re-Discovery: Panning for Wealth in the Warming Arctic,” where 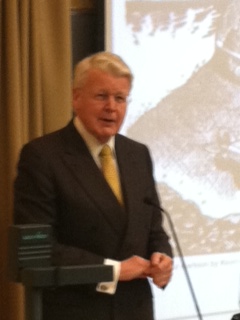 more than 50 government officials, business leaders, academics and environmentalists convened to talk about Arctic energy, environment and governance issues. The conference featured an impassioned speech by Senator John Kerry, in which he advertised that he will be holding a series of hearings on ocean policy and advocated for the ratification of UNCLOS, as well as a presentation by conference organizer Crocker Snow and international sustainability maven Wilford Welch of a “Wealth of Arctic Nations Triangle Index” (a presentation of an earlier draft of the index is here). At the end of the conference, the President of Iceland, Olafur Ragnar Grimsson, delivered a thoughtful and engaging keynote, in which he addressed the history and direction of international Arctic governance (a transcript of the speech is available here).

Since 1996, the eight Arctic nations (the U.S., Canada, Iceland, Denmark, Norway, Sweden, Finland and Russia) have worked with indigenous peoples through an intergovernmental forum called the Arctic Council to protect the Arctic environment and promote sustainable development. President Grimsson argued that the Council’s model for international environmental governance is both unique and worth replicating. He began by discussing the six elements of his “Arctic model” of governance:

1) The Council has been “non-bureaucratic” in that, until recently, it had no permanent secretariat and a rotating directorship that changed every two years. (In 2011 the nations agreed to establish a permanent secretariat to increase the Council’s capacity.) President Grimsson implied that this created a political dynamic that fostered mobility and innovation. In a keen response to the President’s speech, Alexander Pilyasov, Head of Center for Arctic & Northern Ecos in Moscow, noted that this structure itself derived from, or at least shared some characteristics of, the governance structures of Arctic indigenous peoples.

2) The Council is democratic in that it has been inclusive of both indigenous peoples and NGOs in planning and research activities. Indigenous peoples are, under certain circumstances, granted “permanent participant” status in the Council. NGOs may be granted observer status. Non-Arctic states may also be granted observer status, either as permanent or ad hoc observers (Dr. Pilyasov offered an important correction here, noting that the Council is institutionally diverse, though not necessarily democratic.)

3) The Council adapted to new and emerging diplomatic norms. Both within the Council and in broader discussions, President Grimsson maintained that there is a vertical as well as a horizontal exchange, meaning that there is discussion in which civil society representatives and state and local officials engage directly with national leaders and senior members of various government bodies, both within and between nations.

4) The Council has placed an emphasis on science-based policies (or, as Dr. Pilyasov called them, knowledge-based policies). This includes the production of scientific reports, such as the 2004 Arctic Climate Assessment Report, which serve as the basis for decision-making, and scientific cooperation, as evidenced by the establishment o the University of the Arctic and the Northern Research Forum.

5) The Council has operated on the premise that all partners are of an equal status. Certain states supposedly “leave outside the room” their super-power status.

6) The Council was, from the outset, future-oriented, and built upon the recognition that cooperation was not to settle old differences but to plan for the future for both the environment and the people of the Arctic.

This model, according to President Grimsson, has produced a number of positive results, including the development of diplomatic dialog and progressive cooperation in a formerly militarized international region; the effective integration of civil society into the governance process; the production of actual agreements, including the Agreement on Cooperation on Aeronautical and Maritime Search and Rescue in the Arctic and the ongoing preparation of an instrument on Arctic Marine Oil Pollution Preparedness and Response; and the establishment of an area where Russia and the U.S. actually cooperate. There are obvious gaps in the Council’s work—there is, for instance, no coverage of security issues—and there are plenty of critics to challenge President Grimsson’s optimistic take on its structure and success, but there does seem to be evidence that this toothless, under-funded, soft law approach has produced some significant cooperation in managing a large and still largely unknown commons.

Toward the end of his talk, President Grimsson suggested that the Arctic model might be useful in forging a new governance regime in the Himalayas and the Tibetan Plateau, the planet’s “Third Pole.” Like the Arctic, this region is defined by ice; its glaciers, extending across parts of India, Pakistan, Nepal, Bhutan and China, provide water for the big rivers of India and China and for downstream populations. Though the climate change impacts on the Himalayan glaciers are less certain than in the Arctic, there is no question of the risks posed by glacial melt. It may well be that, as President Grimsson suggested, the Arctic model affords a potential means to generate cooperation between India and China, as well as the smaller nations.

Going a step further, I wonder if the Arctic model offers a way to think about another large-scale commons problem, namely, the emission of greenhouse gases into the atmosphere. Is this model helpful in thinking about potential ways to overcome the impasse to a comprehensive international agreement on climate change? Would the collaborative, soft law approach work? Or is this just another utopian vision of the Arctic imagination? I am, at first blush, skeptical, and for two reasons. First, Arctic nations share a geography that is visible and tangible, one that is easily comprehensible (and as President Grimsson joked during his talk, they also share the experience of Arctic winter). Everybody shares the earth, of course, but the awareness of this fact has yet to get us over the hump with climate change. Second, it feels like a step backwards, away from binding commitments, and I worry that it is too late to even consider the option. But I think it’s open for discussion, and as we move toward Rio+20, it’s a discussion worth having. What do you think?

Listed below are links to weblogs that reference Emerging Issues in the Arctic: