Here's a quick follow up to last week's post about the air quality situation in many of China's urban areas. I thought I'd post some photographs graciously shared with me that demonstrate the point far better than my words. These were taken from the window of a Beijing resident's apartment near the center of the city. The first was taken on a clear day, with the particulate matter or "PM 2.5" smog index around 60. The second was taken a few days later when the PM 2.5 index was over 400. (For reference, as I mentioned in the original story, a bad day in Los Angeles is around 90.) 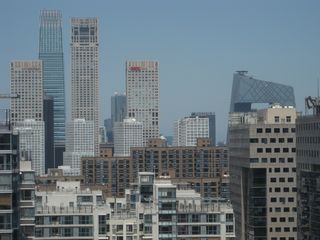 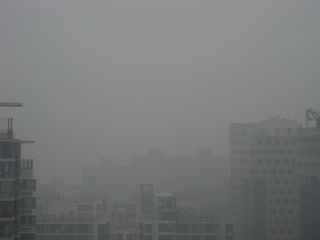 I just returned to Qingdao from a week in Beijing. The air quality varied widely during my stay in Beijing, complete with throat-choking chemical plumes that passed overnight to sunny blue skies with the occasional story-book cloud. But I left on a very average day for Beijing, with the index hovering between 150-200. According to the U.S. Embassy's monitor, this ranks as "unhealthy" air quality. But my friend was still happy, because, as he explained, he could see shadows and the sun...

P.S. For the record, I also updated some statistics in the fourth paragraph of the original story.