Dam removals have featured prominently in the news of late, with the Condit and Elwha Dams both coming down (cool footage here; notice the uncanny resemblance between the first rush of water and the smoke monster from Lost) and with Klamath dam removal legislation now introduced in Congress.  That makes this as good a time as any to highlight another major dam removal project in my home state of Maine. 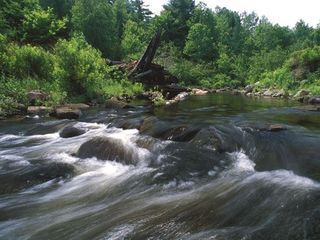 The project involves the Penobscot River, which begins near Mount Katahdin (the northern terminus of the Appalachian Trail) and discharges west of Acadia National Park.  In between, the river drains a lot of high quality habitat (such as the tributary shown at left; the photo is from the Penobscot River Restoration Trust's website) but also flows through a series of dams.  Many of the dams are quite old and lack fish passage facilities.  While the river still supports some fisheries, including a run of endangered Atlantic salmon, its diadromous fish runs are a small fraction of their historical scale.

For years, the Penobscot River Restoration Trust, a partnership between several environmental groups and the Penobscot Indian Nation, has worked with PPL Corporation, which owns several of the dams, on a restoration project.  The details are described on the Trust's website, and in several articles written by some of the project participants (examples here, here, and here), and I'll just give a quick summary.  The river's two lowermost dams will be removed.  A third dam will be decommissioned, and will be left in place with improved fish passage facilities.  Four other dams will also receive fish passage improvements while continuing to operate.  Normally dam removal projects involve trading habitat gain for the loss of a non-polluting energy source, but here, PPL Corporation will be allowed to boost hydropower capacity at six remaining dams, effectively offsetting the capacity lost through dam removals and decommissioning (PPL also will receive a large amount of money, which the trust members obtained through a major fundraising effort).  The net effect will be dramatic: by planning at a basin-wide scale, rather than one dam at a time, the participants will achieve a huge increase in habitat accessibility with little or no loss of power production capacity. Image from Jeffrey J. Opperman et al., The Penobscot River, Maine, USA: A Basin-Scale Approach to Balancing Power Generation and Ecosystem Restoration, 16 Ecology and Society 7 (2011).  Thanks to Colin Apse for sending me the image.

There's much, much more to be said about the project, and it will likely be the subject of much more academic analysis (teams already are working on before-and-after studies of the project's effects; one example already is documented here).  I'd encourage anyone interested in renewable energy generation, endangered species protection, large-scale ecosystem restoration, or collaborative environmental decision-making to check the Penobscot project out.  It's a really exciting effort.

Listed below are links to weblogs that reference The Penobscot River Restoration Project: