When the Decline of an Endangered Species Hits Close to Home 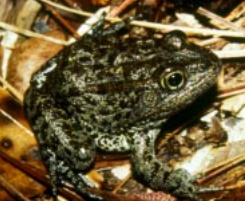 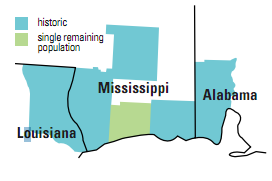 When in college (1997-2002) I was introduced to the Gopher Frog (Rana Capito). A biology professor of mine at the University of Montevallo, Dr. Malcolm Braid, performed research on the frog, including an innovative captive breeding and relocation program. The frog was rapidly disappearing from Alabama due to both urban sprawl in areas of critical habitat as well as the destruction of the longleaf pine ecosystem. The gopher frog has a cousin, the Dusky (Mississippi) Gopher Frog (Rana Sevosa), which had previously been considered a subspecies but was elevated to species status in 2001. Only one small population of the dusky gopher frog now survives in a small area in southern Mississippi (picture above) and the frog only numbers around 100 individuals in the wild (though 1500 live in captivity in a successful breeding program). For more information on the frogs see here and here.

The longleaf pine ecosystem upon which the gopher frogs depend once stretched over 90 million acres across the entire southeastern U.S., but now only around 3-4% of it remains. Fire suppression, urban development, and forestry practices that replaced longleaf with monoculture pine plantations are primarily to blame for the loss of the ecosystem. Not only does the longleaf ecosystem provide critical habitat for the dusky gopher frog, but it also supports a variety of other unique species also listed under the ESA, such as the Gopher Tortoise (about which I have previously written) and the Red-Cockaded Woodpecker, among others (in fact, my pioneering grandfather, in an early effort to engage in the complex task of scientific tracking of species on our forestland in Alabama, spray painted, in red, "Toby" on the back of one unsuspecting - or perhaps suspecting, but slow - gopher tortoise. He would see Toby from time to time and know that he was doing well - except perhaps for the lead potentially leaching into his shell. But that is neither here nor there). The gopher frogs actually get their name because they survive in the burrows of gopher tortoises, which act as a "keystone species" for a variety of other species.

So when I learned of the federal government's plans to triple the area proposed as critical habitat for the dusky gopher frog I was encouraged, even though the proposal only gives the frog "a shot at survival." But at the same time, the news was a bit troublesome - not actually the news, but the memories it dredged up of my lack of understanding of the value of biodiversity when first introduced to the frogs. The gopher frogs of Alabama were some of the first natural resources I ever thought about in a critical manner as I began my college education. To see their habitat continue to be imperiled and to know that other populations of frogs are hanging only by a thread, really hits close to home - in more ways than one. I have previously posted about how global society is not even doing a good job of protecting charismatic megafauna (see Lions, Tigers, and Bears...All Gone?). How much more difficult will it be to preserve these southern treasures reliant on an ecosystem - and a piece of southern history - that we have already almost entirely eradicated? Hopefully the federal government's efforts will be a step in the right direction, and can make a difference before the sun goes down on the dusky gopher frog's time in the south and on the earth.

Listed below are links to weblogs that reference When the Decline of an Endangered Species Hits Close to Home: