The U.S. Forest Service recently released a report detailing the projected impacts population growth and urbanization will have on southeastern forests over the next 50 years, reducing 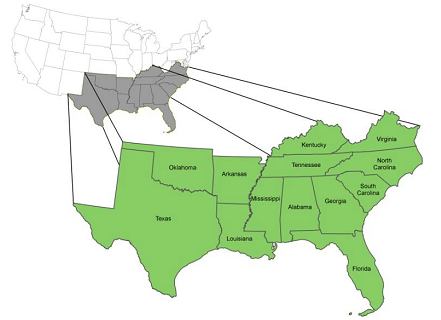 them by as much as 23 million acres (or 13%).  The report provided four primary reasons for the decline: population, climate change, timber markets and invasive species.

Southern forests are among the most biodiverse forests in the United States, and a disproportionate number of endangered species are located in the southeast when compared to other regions of the U.S.

The report indicates that private individuals and companies will be crucial to the effort to curb the destruction, noting that nearly 90% of the forestland in the south is privately owned.  Even so, regulation of land uses such as private forestry and urban development is seen as a role constitutionally reserved for state and local governments.  In turn, the southeastern U.S. maintains some of the most lax forest regulatory standards (not to mention zoning standards) in the world, even less rigorous than many developing countries, according to a study performed by Cashore and McDermott and as seen in the below chart (a "9" denotes the most stringent forest regulatory standards and a "0" the least).

Most all southeastern U.S. states maintain "best management practices" that are completely voluntary on the part of the forest manager. These BMP's may suggest to a private forester that he or she leave a buffer zone of trees around watercourses in watersheds in order to prevent erosion, siltation and eutrophication of waterways, among other environmental and economic harms. But foresters can feel free to ignore those "standards" and clear timber to the edge of the stream if they so choose.  The only claim an adjacent landowner might have against the offending party is a common law nuisance claim, if there was damage caused to their property by the erosion, etc., since no regulatory remedies are available.

A co-author of the Forest Service report stated "We're counting on policy-makers...to implement and act on some of the findings...That is our hope."  Hopefully policy-makers at the state and local level will take heed of the report and make much needed changes to the approach and rigor of both southern forest management and urban growth control. As a southern forester myself, I really would prefer not to have 10% fewer trees gracing this beautiful, and environmentally rich, part of the country.

Listed below are links to weblogs that reference Can't See the Forest for the People - Southern Forests Threatened By Increasing Population: