Probably the best bang for your CLE buck in Pennsylvania comes from the two-day Elder Law Institute hosted each summer by the Pennsylvania Bar Institute. This year the 18th annual event is on July 23 & 24 in Harrisburg.

There is still time to registration (you can attend one or both days; lunches are included and there is a reception the first evening).

I think this is the first year I have missed this key opportunity for networking and updates; but I'm sending my research assistant!

NAELA welcomes the effort to try to make the eligibility criteria for pension and other benefits administered by VA objective and transparent, but we believe that these proposed regulations, if implemented, would cause substantial harm to wartime Veterans, their spouses, and dependents and will not solve the serious issue of unscrupulous organizations taking advantage of potential beneficiaries by selling inappropriate annuities or trusts.

In addition, we express the serious concern that the proposed rule’s 3-year look-back period and transfer of assets penalty exceed statutory authority, opening up VA to future litigation and causing additional uncertainty for Veterans and their families.

2,000 Veterans Wait In Line to Get Nursing Home Care In Missouri

From WGEM.com in Hannibal, Missouri, coverage on "2,000 Veterans Waiting in Line to Get Into Missouri Nursing Homes,"

"Some wait more than a year to get full care covered through veteran's benefits, and it's even harder for veterans without a state home close to where they live because they have even fewer options.

'I had to have a place to go, so they got me in,'  Army veteran Robert Johnson said. Johnson is at Beth Haven Nursing Home in Hannibal for the time being. He had to choose a private care facility because there are relatively no veteran's homes in the area. 'Oh yeah, it's pretty expensive to stay here,' Johnson said. 'I think they ought to have something to help veterans out. A lot of people have a pretty hard time anymore.'

Veterans who pay for private care do get supplemental money through benefits, and those using Medicaid also get personal allowance, but sometimes it's not enough. Beth Haven CEO Paul Ewert says there are some cases where families have to either pay out of pocket or travel hours away for full care."

Proposed Regs from the VA

The Federal Register on January 23, 2015 included a proposed rule from the VA on Net Worth, Asset Transfers, and Income Exclusions for Needs-Based Benefits.  Here is an excerpt from the executive summary

This proposed rulemaking would amend regulations governing VA's needs-based pension programs to promote consistency in benefit decisions, reduce opportunities for attorneys and financial advisors to take advantage of pension claimants, and preserve the integrity of the pension program. The revised regulations would promote consistent decisions by establishing a bright-line net worth limit and re-defining net worth as the sum of assets and annual income. The revised regulations would also promote consistent decisions by defining in regulations those unreimbursed medical expenses that VA will deduct from a claimant's annual income for purposes of determining a claimant's annual pension payment.

By establishing in regulations a look-back and penalty period for claimants who transfer assets before applying for pension to create the appearance of economic need where it does not exist, the revised rules would reduce opportunities for financial advisors to provide advice for the restructuring of assets that, in many cases, renders the claimant ineligible for other needs-based benefits. Establishing a look-backand penalty period for pre-application transfers of assets would also preserve the integrity of the pension program by ensuring that VA only pays the benefit to those with genuine need.

Rural Vets Get Care via TeleMedicine

Reuters ran an interesting story last month about the use of telemedicine to deliver health care to rural vets. The story, For rural vets with PTSD, Telemedicine may help is based on a study published in the November, 2014 JAMA Psychiatry

The Reuters article explains a new study that shows using telephones and videochat can be helpful in the treatment of PTSD for these vets. This most recent study  "included 265 middle-aged vets with severe PTSD symptoms at one of the outpatient clinics without onsite psychiatrists or psychologists from 2009 through 2011.” Recruited from 3 different areas of the country, 50% of the vets “received the outpatient clinic’s ordinary care” while the remainder had access to “an additional care team at a larger medical center via telemedicine.”  This team included a variety of professionals, such as pharmacists and nurse care managers who called the vets, and video-chat consults with psychiatrists who subsequently provided “feedback and treatment recommendations to providers at the clinic through electronic medical records.” Video chat was also used by psychologists for “cognitive processing therapy, a specific behavioral therapy developed to treat PTSD…”

The story notes that the technology isn’t right for every vet, but a large number in the study were happy with it and that further research is needed to in order to determine the path to widespread use.

The JAMA article offers this conclusion “Telemedicine-based collaborative care can successfully engage rural veterans in evidence-based psychotherapy to improve PTSD outcomes.” The JAMA article abstract is available here, and the full article is available by subscription or purchase.

Penn State Dickinson Law's Registrar, Pam Knowlton, has a not-so-secret life as  seamstress, trainer and godmother to several of the most patient dogs on earth. 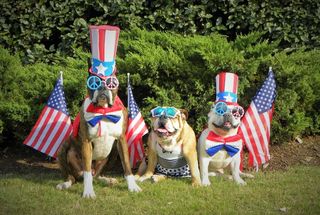 Newman, Thelma and Roger will be hard at work again on Veterans' Day, with scheduled visits at nursing homes and care centers around the mid state.  It is pretty much impossible not to smile when these therapy dogs report for duty.

Roger, a French bulldog, apparently has combat training too.  Newman, the boxer, has his own blog....

This Note argues that in practice this privatization model is seriously flawed and that it exposes some of the most vulnerable portions of the veteran population's funds to misuse. In support of this conclusion, this Note compares the federal statutes, regulations, and internal directives that govern the Fiduciary Program--paying special attention to the Fiduciary Program Manual-- with audits performed by the Veterans Affairs Office of Audits and Evaluations and the U.S. Government Accountability Office. Relying on these audits, this inquiry rejects total reliance on substantive statutory reform in light of legislative and judicial barriers. Instead, this Note advocates for critical internal reforms designed to improve the Program's efficiency and functionality, the adoption of a state enforcement mechanism, and reliance on principles of cooperative federalism and interagency cooperation."