NYT: A Wife's Worries about the Crisis at Her Husband's Nursing Home

On Memorial Day, we have important opportunities to think.  Today, I've been thinking about those lost in wars and those who survive.  A year ago, I joined a group doing a World War II memorial tour of England and France. I was unprepared for how much walking the beaches at Normandy and the nearby cemeteries would affect me. 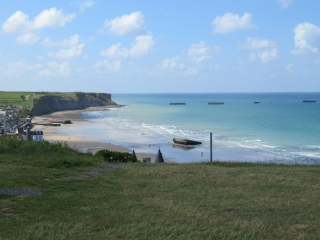 Even though my family was not directly impacted by that war, it was a reminder that we are all affected by tragic losses of life.

Today I also just read a very thoughtful piece written by Marcella Goheen for the New York Times.  An image of another war emerges. She explains how her husband at age 65 has been affected by a neurodegenerative disorder that makes it impossible for him to care for himself, and eventually became so severe that it also was impossible for her to care for him at home.  We forget that "nursing homes" are often not just for the very elderly, and can become the short-term or long-term homes of anyone with severe disabilities.  But that doesn't mean that people go there "to die."

There is life in a nursing home. My husband worked in special education for over 20 years. He understands deeply the value of a life, no matter what form that life takes. He would fight for his fellow residents if he could. I feel betrayed because, while leaders like Gov. Andrew Cuomo and Mayor Bill de Blasio were speaking in their daily news conferences of the “vulnerable population” that needed the most help, not one federal, city or state agency prioritized preventing the loss of life in nursing homes. Instead, officials fought over whose responsibility it was to serve the chronically ill, elderly and disabled people who live in New York State nursing homes. In a mid-April news conference, Governor Cuomo said that “it’s not our job” to provide personal protective equipment to nursing homes in New York City.

My husband was thrown into a war on the vulnerable without a chance — he cannot care for himself or protect himself from a virus that doesn’t have a vaccine. The fact that he is still alive is a miracle. As of May 10,it was likely that over 5,000 residents in nursing homes statewide had perished. They matter. To be given a chance to live is a human right, and the business of care that impedes this right in any way needs a major reckoning. Not testing health care workers and residents, not addressing staffing shortages, not updating families on loved ones’ conditions and not producing effective plans for managing infections within nursing homes is unacceptable.

There is much more to The Crisis at My Husband's Nursing Home, where she reports that 98 have died with diagnoses of Covid-19.