Can We Better Assure Retirement Security in the U.S.?

Everyone agrees that we need a stronger national commitment to "retirement security" in America.  But what, exactly does that mean? 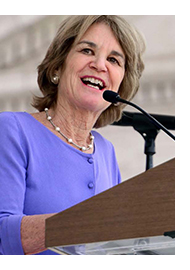 This topic will be a central focus for discussion during a Public Forum hosted at Penn State's Dickinson Law on Tuesday, November 12, 2019.  The keynote speaker is former Maryland Lt. Governor Kathleen Kennedy Townsend, who is currently the Director of Retirement Security at the Economic Policy Institute, as well as serving as a research professor at  Georgetown University.

Along those very lines, last week I read a news article  about the latest stalemate at the federal level on specific legislation that could promote better retirement savings.  The measure in question is H.R. 1994, the "Setting Every Community Up for Retirement Enhancement" Act -- and of course that name was chosen to reinforce the goal of SECURE futures.  The bill passed the House with strong, bipartisan backing in May 2019, but is now mired in the Senate. Excerpts from The Hill describe the roadblocks to passage:

GOP senators on Thursday attempted to bring a House-passed retirement savings bill to the Senate floor with votes on a limited number of amendments, but the effort was rejected by Democrats.

The Republican effort and Democrats' rejection highlighted how, despite widespread bipartisan support and backing from industry groups, it is still unclear when the retirement bill will be enacted.

The House in May in a nearly unanimous vote approved the bill, known as the SECURE Act. The bill includes a host of provisions aimed at making it easier for businesses to offer retirement plans and for people to save for retirement. It also reverses a provision in the 2017 Republican tax-cut law that inadvertently raised taxes on military survivor benefits paid to children....

Sen. Patty Murray (D-Wash.) objected to the Republican request, saying that Senate Democrats want the chamber to pass the House-passed bill as-is, without any amendments.

“We have a few Republican senators who want to sidetrack it with last-minute amendments, including proposals that are not in the interest of working families and will kill any chance this bill has of becoming law,” she said.

For another perspective, see "What is the SECURE Act? How Could It Affect Your Future?"