Do POLST Forms Require Authorizing Legislation to be Effective? 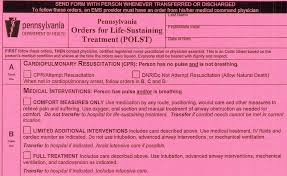 In Pennsylvania, we've had bills pending for several years that would expressly authorize the use of POLST forms for agreements between physicians and their patients about life-sustaining treatments.  Pennsylvania has a fairly long history of dragging its feet about enacting laws regarding end-of-life decisions, and was one of the last states to formally recognize so-called living wills or other advanced health care directives.   The traditional legal reason for statutory authorization is that statutes validate pre-incapacity decisions that will only become effective once incapacity occurs.  The authorization, in essence, allows the document to survive the incapacity of the principal.

But is this same reasoning applicable to POLST forms? Is legislation required to make this form of "planning" effective?  As currently used, the forms require a conversation between the health care provider and the patient (or the patient's representative -- and that can get tricky in Pennsylvania), usually in the context of hospitalization or an immediate or looming health crisis, that results in the patient's "informed" decisions becoming the "doctor's order" for treatment.  In 2006, a Pennsylvania law directed establishment of an advisory committee "to assist in determining the advisability of using" POLST forms that "detail the scope of medical treatment for patients' life-sustaining wishes."  The committee included representatives of the state's medical society, the joint state government commission that advises on Pennsylvania law, the Pennsylvania Bar association and relevant state agencies.  Following a grass roots movement to implement the POLST concept, eventually a Pennsylvania Department of Health form was developed and approved on a trial basis with individual hospitals.  The bright pink POLST forms currently in use in Pennsylvania certainly look "official."

In December 2018, after another attempt to create clear state authority for POLST failed to reach a vote in the Pennsylvania House, one of the Senate sponsors wrote to explain why passage is important.  Senator Gene Yaw takes the position that clarity of scope of authority, prohibitions on improper insurance company use, portability or the orders for transfers between facilities and clarity of application during emergency medical services are all necessary elements of statutory authority, needed to assure that "individuals ... have the right to dictate end-of-life decisions in a manner that is sensitive to the situation at hand." Two bills are currently pending, PA Senate Bill 142 (Printer's No. 117) and PA House Bill 997 (Printer's No. 1118).

In the meantime, it seems that patients are creating POLST orders with physicians in Pennsylvania, without authorizing legislation.

I am aware that end-of-life legislation of any sort in Pennsylvania is a messy process, but that may be one good reason to avoid POLST legislation. There are states where POLST is thriving that launched POLST without legislation—e.g., Oregon, Minnesota, and Virginia. In these states it is accepted as a standard of proactice. Oregon later enacted POLST registry legislation but it does not address the underlying process or form of POLST. In Virginia, providers first argued that legislation was necessary in order to ensure uniformity, acceptance, protection from liability, and interstate portability. But as voluntary compliance spread, those issues faded. The one regulatory hurdle successfully jumped was getting the Health Department to clarify that POLST (or POST in Virginia) was equivalent to what’s called a durable DNR order in state law. In contrast, in DC the Out-of-hospital DNR law prohibited any additions or variations to the statutory out-of-hospital DNR order, so POLST could not get a foothold without legislation. Legislation may or may not be helpful or needed, and sometimes it creates whole new problems and restrictions. All I am really saying is that the necessity for legislation needs to be closely scrutinized.