Are games and food supplements that promise to stave off the onset of dementia the modern day version of "snake oil?" I promised to write more about the Aging Brain Conference at Arizona State University's Sandra Day O'Connor College of Law on December 8, 2017.  Speaker Dr. Cynthia Stonnington, Mayo Clinic, offered an important look at ways in which law, ethics, medicine, and commerce can collide with her survey of a host of approaches receiving "popular" press treatment.

She examined self-described "brain-training" programs, miracle diets, supplements and targeted exercise programs, noting that most studies that purport to demonstrate positive results from these items have serious flaws.  Thus, at best, programs that claim to provide "protection" against dementia are usually promising more than has been proven.  Dr. Stonnington, along with the morning keynote speaker, former U.S. Surgeon General Richard Carmona, reminded us that

are  far more important than any single, magic game or exercise.

One of the most lively discussions of the day came near the end, in response to presentations by Dr. Patrica Mayer of Banner Health in Phoenix, Amy McLean of Hospice of the Valley. and Life Sciences Professor Jason Robert (ASU) speaking for himself and Susan Fitzpatrick (James S. McDonnell Foundation), about end-of-life considerations for persons with dementia or other serious illnesses.  What would be the most likely response of a physician or emergency personnel confronted with a "do not resuscitate" tattoo on the chest of an emergency patient?  Dr. Mayer stressed that she is seeking reliable methods of communicating end-of-life wishes, and for her that means a preference for a written, Medical Power of Attorney.  She wants that "live" interaction whenever possible, in order to fully explore the options for care for individuals unable to communicate for themselves.  But she also noted a frequent frustration when she contacts designated  POAs about the need to make tough decisions, only to learn they were completely unaware before that moment of having been named as the designated agent. 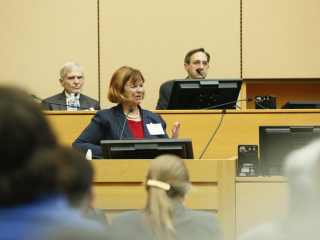 I was part of a panel of court-connected speakers, including Arizona Superior Court Judge Jay Polk (Maricopa County), neuropsychologist  (and frequent expert witness) Elizabeth Leonard, and experienced Phoenix attorney Charles Arnold.  I was interested to hear about  -- and will pursue more information on -- the psychologists' use of evaluative tools for clients that use scenarios that would appear to test not just for loss of memory, but impaired judgment.  I was speaking on the unfortunate need for judicial inquiries into "improvident transactions" by persons with problematic cognition and I used litigation approaches from other locations -- Ireland (common law) and Maine (statutory) -- as examples.  The Arizona legal experts reminded me to take a closer look at Arizona's financial exploitation laws.

For more from this conference, see Learning to Say the Word "Die"  --  about a pilot program developed by Dr. Mayer while she was an advanced bioethics fellow at the Cleveland Clinic.  I also recommend Dr. Mayer's article on CPR & Hospice: Incompatible Goals, Irreconcilable Differences,