The "Aging Brain" Conference hosted by Arizona State University's Sandra Day O'Connor College of Law held on December 8, 2017 at the Sandra Day O'Connor United States Courthouse in Phoenix (that's a double helping of Sandra!) proved to be a fascinating, deep dive into the intersection of medicine, ethics and law with a focus on neurocognitive diseases, including Alzheimer's Disease.  The panelists and audience included academics in a wide range of fields, plus practitioners in medicine, law, social services, and more, along with both state and federal judges.  United States District Judge Roslyn Silver is a long-time supporter of law and science programming with ASU. 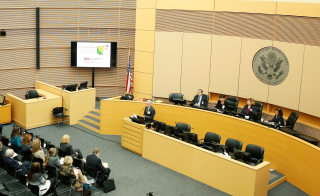 One of the important themes that emerged for me was the growing significance of pre-symptomatic tests that can disclose genetic markers associated with greater incidence of an eventual, active form of a degenerative brain disease.  Neurologist Richard Caselli from Mayo Clinic and Jessica Langbaum, principal scientist with Banner Alzheimer's Institute laid out the latest information on a variety of genetic testing options, including the possibly mixed results for "risk" connected to positive results for specific genetic markers.  A provocative question by a morning speaker, Law and Biosciences Professor Henry T. Greely at Stanford, captured the personal dilemma well, when he asked the audience to vote on how many would want to to know the results of a genetic test that could disclose such a connection, especially as there is, as yet, no known cure or even any clear way to prevent most neurocognitive diseases from taking hold.

Taking that a step further, how many of us would want our employer to know about that genetic marker results?  How about our health insurers? As we discussed at the conference, some consumer information is already available through "popular" ancestry testing sites such as "23 and Me," which expressly offers testing for "genetic health risks," including "late-onset Alzheimer's Disease and Parkinson's Disease."  Arizona State Law Professor Betsy Gray, director of the Law & Neuroscience Program for ASU's Center for Law, Science and Innovation, who master-minded the conference, helped to identify a host of legal and ethical issues connected to this developing world of science and medicine. Jalayne J. Arias, a full-time researcher at University of California San Francisco's Neurology, Memory and Aging Center (and clearly a rising academic star and graduate of ASU Law) outlined the implications of pre-symptomatic testing from the perspective of long-term care insurance.  For more from Professor Arias, I recommend her 2015 paper for the Journal of Clinical Ethics on Stakeholders' Perspectives on Preclinical Testing for Alzheimer's Disease.

I plan to write more about this conference, as many perspectives on legal, ethical and medical questions were offered.