On November 17,  2014, following more than a year of study  and consultation, the Pennsylvania Supreme Court's Elder Law Task Force issued a comprehensive (284 pages!) report and recommendations addressing a host of core concerns, including how better to assure that older Pennsylvanians' rights and needs are recognized under the law.  With Justice Debra Todd as the chair, the Task Force organized into three committees, focusing on Guardianships and Legal Counsel, Guardianship Monitoring, and Elder Abuse and Neglect.  The Task Force included more than 40 individuals from across the state, reflecting backgrounds in private legal practice, legal service organizations, government service agencies, social care organizations, criminal law, banking, and the courts. 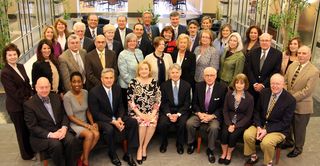 From the 130 recommendations, Justice Todd highlighted several "bold" provisions at a press conference including:

The full report is available on the Pennsylvania Supreme Court website here.  As a consequence of the Task Force study, the Supreme Court has approved the creation of an ongoing "Office of Elder Justice in the Courts" to support implementation of recommendations, and has created an "Advisory Council on Elder Justice to the Courts" to be chaired by Pennsylvania Superior Court Judge Paula Francisco Ott.