Last week I posted our first Elder Law Prof "Spotlight."  We're using these opportunities to shine the light on faculty members in the U.S. and Canada who teach "law and aging" courses.  We're looking to go beyond profiles posted on law school websites.

Once again, we've found a great target for our spotlight with James Pietsch at the University of Hawaii's William S. Richardson School of Law.  As this photo suggests, Jim has unique experience in "jumping in with both feet" to help those in need. 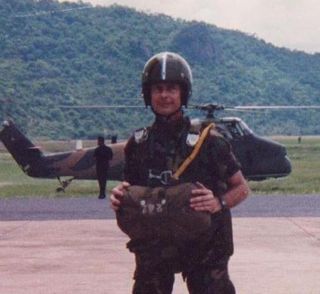 Jim teaches interdisciplinary courses such as "Law, Aging and Medicine" and "HealthLaw: Bioethics" for students at the law school, the medical school, the school of nursing, and also for graduate students in social work, all at the University of Hawaii. His teaching is uniquely rooted in his military service, beginning with his active duty in the U.S. Army Medical Service Corps and the JAG Corps.  He served  tours of duty in Korea, D.C. and Hawaii.

After his full-time military service, Jim became a directing attorney at the Honolulu Elder Law Unit for Legal Aid. That role evolved and culminated in creation of the University of Hawaii Elder Law Program,  with the appropriate -- and catchy -- acronym of UHELP. Professor Pietsch supervises clinical students who provide direct legal services on a year-round basis. Jim reports he is just one part of a great team at UHELP and the clinics.

Jim continues to serve in the Army Reserves.  In 2007, during the surge in Iraq, Professor Pietsch was the Special Advisor to the Law and Order Task Force of the Multi-National Force in Iraq.  He also served as the Rule of Law Advisor to two reconstruction teams in Iraq.  Bringing to bear all of his experiences in the military, education and direct legal services, he helped to establish a legal aid clinic for detainees in Iraq, working with the Iraqi Bar Association.  Jim reports he was able to use the University of Hawaii's Elder Law Clinic materials in creating an operational manual for the Iraqi Clinic. He also consulted with the US AID-sponsored Access to Justice Project to help establish legal aid clinics in Iraq with a goal of providing legal assistance to underserved populations throughout the country, including ethnic and religious minority groups.

As you might imagine, given the experience and leadership skills of Jim Pietsch, the University of Hawaii's clinics have a special focus on veterans.  In November 2013, Jim, Stetson Law Professor Becky Morgan and others teamed up to host an International Elder Law "Veterans Focus" Conference in Hawaii, coinciding, appropriately enough, with Veterans Day. It also appears that Jim has a great sense of humor -- as demonstrated by the tradition of his University's "Nite of the Living Will" -- an annual program at Halloween, where faculty and students, often in costume, assist members of the public in learning more about advance health care directives and help them execute appropriate documents.

Mahalo, Jim, for your inspiring work!

Listed below are links to weblogs that reference Spotlight on University of Hawaii Law's James Pietsch: