SECTION NEWS: Professor Barry Kozak, the Director of Elder Law Studies at the Center for Tax Law and Employee Benefits at the John Marshall Law School in Chicago (and our Section Chair) has informed the leadership of the Section that there will be a Joint Program at the AALS Annual Conference in New Orleans, from January 4 – 8, 2013. Our Section will join the Section on Trusts & Estates for the program. According to Barry, the three panels will address the following:

2. Conflicts of interest with family members as beneficiaries in T & E documents and as agents, guardians or conservators in elder law documents and court orders; and

Barry is looking for volunteers to present on or moderate for the panels. There will also be a call for papers. If you are interested, please contact Barry at: 6kozak@jmls.edu

3. Why Retirees Will Benefit from Tax Deferral: http://money.usnews.com/money/blogs/On-Retirement/2012/04/18/why-many-people-will-benefit-from-tax-deferral

7. 10 Things You Should Know About Social Security: http://www.aarp.org/work/social-security/info-08-2010/10-things-you-need-to-know-about-social-security.html

All over the world, there is a growing interest in the relationship between law and aging: How does the law influence the lives of older people? Can rights, advocacy and representation advance the social position of the aged and combat ageism? What are the new and cutting-edge frontiers in the field of elder law? Should there be a new international human rights convention in this field? These are only a few of the many questions that arise.

This book attempts to answer some of these questions and to set the agenda for the future development of elder law across the globe. Taking into account existing research and knowledge, leading scholars from different continents (North America, Europe, Asia, and Australia) present in this book original and novel ideas regarding the future development of elder law. These ideas touch upon key topics such as elder guardianship, citizenship, mental capacity, elder abuse, human rights and international law, family relationships, age discrimination, and the right to die. This book can thus serve as an important reference work for all those interested in understanding where law and aging are headed, and for those concerned about the future legal rights of older persons.

The Consumer Financial Protection Bureau (CFPB) is the first federal agency devoted to consumer protection in the financial marketplace.  Since we officially opened for business in July 2011, we’ve been constantly building easy-to-use web tools to help consumers.  You can find them all at www.consumerfinance.gov.

Maggie Anderson from our Consumer Engagement team and others will show you how to use tools like Ask CFPB, an interactive online tool that helps consumers find answers to their basic financial questions, and our College Cost Comparison Tool, which helps students and families compare the cost of colleges by factoring in financial aid offers.  We’ll also show you where to file a complaint about a consumer financial product (like your mortgage, credit card, student loan, checking account, or auto loan) or tell your story - positive or negative - about a consumer financial product or service.

3. Provide your name and email information for the event leader.

You will be able to call in at the toll-free number provided, as well as log in on your computer to follow the demo.  We look forward to your participation.

The training objectives are for both trainers and prospective attendees to understand what should be included in long-term care mediation training.   The Section’s Training Standards Committee is soliciting comments and feedback on the proposed training objectives before finalizing the draft.  You could offer some important perspectives.

The draft training objectives are at:

Comments can be posted on the ACR Web site or sent directly to Carolyn Rodis at cjrodis@yahoo.com .

Larry Frolik, caught in the wild....

A Statement from Secretary Sebelius on the Administration for Community Living

All Americans – including people with disabilities and seniors – should be able to live at home with the supports they need, participating in communities that value their contributions – rather than in nursing homes or other institutions.

The Obama administration and my department have long been committed to promoting community living and finding new mechanisms to help ensure that the supports people with disabilities and seniors need to live in the community are accessible.

Today, with the creation of the new Administration for Community Living (ACL), we are reinforcing this commitment by bringing together key HHS organizations and offices dedicated to improving the lives of those with functional needs into one coordinated, focused and stronger entity.

The Administration on Community Living will seek to enhance and improve the broad range of supports that individuals may need to live with respect and dignity as full members of their communities. These support needs go well beyond health care and include the availability of appropriate housing, employment, education, meaningful relationships and social participation.

Building on President Obama’s Year of Community Living, the ACL will pursue improved opportunities for older Americans and people with disabilities to enjoy the fullest inclusion in the life of our nation.

This publication offers a series of directives that aid in incorporating into risk management processes and programs the concerns and other questions for consideration at different levels of working with and relating to this group of persons. The goal is to aid them in maintaining the highest possible level of health and functional capacity in emergency and disaster situations.

The CDC's Division of Health Care Statistics and the Long-Term Care Statistics Branch recently released Data Brief #91, Residents Living in Residential Care Facilities in the United States: 2010.  The report presents national estimates of RCF residents based on various characteristics, including demographics, Medicaid participation and charges, limitations in activities of daily living, and common chronic conditions.  The estimates are derived from the first nationally representative survey of RCFs with four or more beds.

With respect to services rendered, 38% of residents were assisted with three or more activities of daily living (ADLs), 36% were assisted with one or two ADLs, and 26% did not receive any assistance with ADLs.  The most common ADL that RCFs provided assistance with was bathing (72%), followed by dressing (52%), toileting (36%), transferring (25%), and finally eating (22%).

Ninety-four percent of RCF residents had been diagnosed with one or more of the ten most common chronic conditions in the facilities, which included: high blood pressure (57%), Alzheimer's disease or other forms of dementia (42%), heart disease (34%), depression (28%), arthritis (27%), osteoporosis (21%), diabetes (17%), chronic obstructive pulmonary disease and allied conditions (15%), cancer (11%), and stroke (11%).  Nearly 75% of the residents had been diagnosed with two or more of these chronic conditions.

Based on the statistics gathered, the report concluded that the RCFs housed a vulnerable population that has a high burden of both functional and cognitive impairment.

More information about the RCF residents data brief, including the brief itself, is available online at http://www.cdc.gov/nchs/nsrcf.htm.

Listserv Member News: Professor Katherine Pearson of Dickinson School of Law at Penn State (and Director of the Elder Protection Clinic) will be one of the guests on Australian Public Radio on April 7, 2012. The radio program talk is entitled “Dutiful Sons & Daughters,” and is about filial support laws across the world. It airs at 5:05 pm Australia time, which is at about midnight Pacific Time, so I may wait until the morning to hear her!

10. The War on Cancer: More Americans are Surviving - Here's Why: http://www.aarp.org/health/conditions-treatments/info-03-2012/more-americans-surviving-cancer.html

11.   Trustees not Required to Euthanize “Boots” According to the Terms of a Decedent’s Will: http://www.chicagotribune.com/business/breaking/chi-cat-survives-death-sentence-in-owners-will-after-fifth-third-bank-intervenes-20120404,0,3578581.story

The Arc opposes the Department of Justice’s notice of proposed rulemaking which would delay implementation of the 2010 ADA Standards for Accessible Design.  The Department of Justice extended a March 15 due date for existing swimming pools, wading pools, and spas to be accessible to people with disabilities to May 21, 2012.  Now, DOJ wants to extend the timeline for six more months.

The requirement to remove barriers to accessibility, including providing access to swimming pools for people with disabilities, has been part of the statutory requirement under the ADA since its passage in 1990. The 2010 ADA Accessibility Standards only provide more detailed specifications on how to provide accessibility.  The process for developing the accessibility guidelines has been a lengthy process with numerous opportunities for all interested parties to have input.  All parties have been on notice since September 15, 2010, when the rules were published, that compliance would be required in March 2012.

DOJ’s proposed delay represents a roll back of ADA requirements and sets a very bad precedent.  The ADA was passed 22 years ago.  Why would any business, restaurant, stores, or hotels need additional time to obey the law?

The groups that represent hotels and other places of lodging are waging a very strong advocacy campaign in support of DOJ’s plan to extend the timeline for making swimming facilities accessible.  DOJ needs to hear from people who oppose giving places more time to provide access to everyone.

I am writing to oppose the Department's proposal to extend the date for existing swimming pools, wading pools, and spas to be accessible for people with disabilities.

The effective date for compliance has already been extended by the Department to May 21, 2012. The extension is sufficient, especially since the Department issued the final rule regarding accessibility of public accommodations in September 2010.

Postponing the compliance date for these regulations further would be an unacceptable roll-back of ADA accessibility standards and regulations.

Profs. Frolik, Whitton and Hegland get rave reviews in NYT

The Caregiver’s Bookshelf: A Law Guide for Seniors

How much can a retiree earn without compromising his Social Security benefits? How do you petition for guardianship of an incapacitated older relative (and is that a good idea)? What should you know about reverse mortgages? 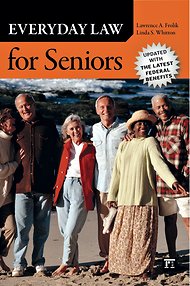 Navigating the law as an older adult, or on behalf of one, is a daunting enterprise. Not only are the regulations, requirements and exceptions multitudinous and confusing, but many of them regularly change. What’s the asset limit for those applying for Medicaid reimbursement of nursing home costs? Well, it depends which year you ask.

“Everyday Law for Seniors,” written by two law professors — Lawrence Frolik of the University of Pittsburgh and Linda Whitton of Valparaiso University — guides readers through the maze. The authors take on a variety of common topics (age discrimination, Social Security, housing, pensions, Medicare and other insurance) and offer clear, careful explanations and suggestions. First published in 2010, the book’s just been updated to include the most recent federal benefits numbers.

Even the most helpful book can’t substitute for the individualized advice of an elder attorney, but this one looks very useful for older people and their families.

Speaking of helpful books, here’s another suggestion from Charles Sabatino, who heads the American Bar Association Commission on Law and Aging: “New Times, New Challenges: Law and Advice for Savvy Seniors and Their Families,” by Kenney Hegland of the University of Arizona Law School and Robert Fleming, a prominent elder attorney. It’s a few years older and a bit broader in scope, said Mr. Sabatino — who’s also a fan of “Everyday Law for Seniors” — but equally clear and reliable.