1. Bifocal, Journal of the ABA Commission on Law and Aging, November – December 2011: http://www.americanbar.org/content/dam/aba/publications/bifocal/bifocal_nov_dec_2011.authcheckdam.pdf

4. Why Senior Citizens Should Believe in Santa: http://money.usnews.com/money/blogs/On-Retirement/2011/12/23/why-senior-citizens-should-believe-in-santa

5. For the Parents, Simple Pleasures: http://newoldage.blogs.nytimes.com/2011/12/24/for-the-parents-this-year-simple-pleasures/

8. For Medicare, We Must Cut Costs, Not Shift Them: http://opinionator.blogs.nytimes.com/2011/12/19/for-medicare-we-must-cut-costs-not-shift-them/?nl=todaysheadlines&emc=thab1

9. Chorus Gives Voice to Those With Alzheimer's: http://health.usnews.com/health-news/family-health/brain-and-behavior/articles/2011/12/22/chorus-gives-voice-to-those-with-alzheimers

Professor Susan Evans Cancelosi of Wayne State is compiling our AALS Aging and the Law Newsletter. Please let her know prior to the AALS meeting in January of any professional activities, job changes, or publications if you'd like them included in the newsletter. Her email is scancelosi@wayne.edu.

Many stakeholders—government agencies, advisory bodies, and professional organizations—have raised concerns about the administrative challenges associated with Part D and have recommended actions to improve access to Part D vaccinations. The Centers for Medicare & Medicaid Services has issued guidance on a number of approaches to help address administrative challenges, but stakeholders report that additional steps are needed, including broader use of web-based systems, that could provide real-time access to allow physicians to verify beneficiary coverage and bill Part D plans.

Recommendation: To help improve the ability of Medicare beneficiaries to obtain routinely recommended vaccinations, the Administrator of CMS should explore options and take appropriate steps to address administrative challenges, such as physicians’ difficulty in verifying beneficiaries’ coverage and billing for Part D-covered vaccinations.

Comments: When we confirm what actions the agency has taken in response to this recommendation, we will provide updated information.

One of my favorite former students recently lost his grandmother. He posted a picture of her (with him) on Facebook and wrote the following: Rest peacefully, grandma. I'm glad you're not hurting any more. I'll miss you dearly. It just touched me so much, so I wanted to share the picture (with his permission). Thanks, Ben!

1. A Contract to Stop Driving: http://newoldage.blogs.nytimes.com/2011/11/30/a-contract-to-stop-driving/?ref=elderly 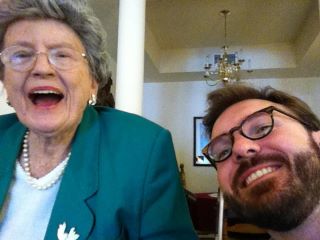 AALS Aging and the Law Listserv for December 6, 2011

Member News: Professor Kenney F. Hegland, the James E. Rogers Professor Emeritus of Law at the University of Arizona has (with Paul Bennett – Clinical Professor of Law and Co-Director of the Child and Family Law Clinic) just completed a book entitled “A Short and Happy Guide to Being a Lawyer.” He and Arizona attorney Robert Fleming are considering writing a “Short and Happy” book on Elder Law. He is interested in which schools offer an Elder Law course and if members might be interested in such a book. It would be short and reasonably priced ($15). Please let Kenney know if your school offers an Elder Law course and whether you might be interested a book of this type. He is available at: kfh@email.zrizona.edu.

6. A Conversation Many Doctors Won’t Have: http://newoldage.blogs.nytimes.com/2011/11/16/a-conversation-many-doctors-wont-have/

11. The Boomers Are Coming: Older People are a Larger Portion of U.S. Population: http://www.nytimes.com/2011/12/02/us/census-finds-larger-portion-of-older-people.html?_r=1&src=rechp