Share
Scientists from Egypt, Germany and elsewhere, including Zahi Hawass of Egypt's Supreme Council of  Antiquities, compiled results from genetic and radiological testing performed on the mummi 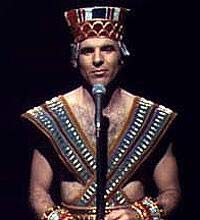 es between 2007 and 2009. The results clarify details about the 155-year-long 18th Dynasty that included Tutankhamen, who inherited the throne at age 11  Tut was afflicted with a cleft palate, mild clubfoot in his left foot and other bone ailments. He and some family members had a form of Kohler disease, which can cause foot bones to collapse from lack of blood but would not have been fatal.  King Tutankhamen, the teen-aged pharaoh whose Egyptian tomb yielded dazzling treasures, limped around on tender bones and a club foot and probably died from malaria, researchers said on Tuesday.  There has been speculation about the fate of the boy king, who died sometime around 1324 BC probably at age 19, since the 1922 discovery of his intact tomb in Egypt's Valley of Kings.Tests performed on 16 royal mummies found four, including Tut, had contracted a severe form of malaria that likely cut short Tut's reign -- ruling out murder or some other sickness.

The scientists speculated Tut was weakened by a broken leg possibly from a fall. That and a malaria infection led to his death, they believe.  "Tutankhamen had multiple disorders, and some of them might have reached the cumulative character of an inflammatory, immune-suppressive -- and thus weakening -- syndrome. He might be envisioned as a young but frail king who needed canes to walk," Hawass wrote in the Journal of the American Medical Association.

Listed below are links to weblogs that reference News of the Old: King Tut died of malaria, ho hum.: