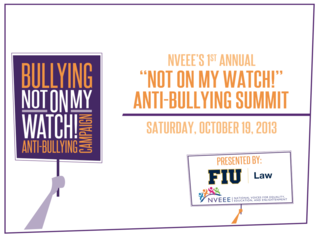 October is National Anti-Bullying Month, and Florida International University (FIU) College of Law is hosting National Voices for Equality, Education and Enlightenment (NVEEE) for the “Not on My Watch” Anti-Bullying Summit on Saturday, October 19. Panelists will include Jane Clementi, mother of Tyler Clementi, a gay teen who ended his life several days after a cyber-bullying incident by jumping off the George Washington Bridge; Cassidy McMillan, Producer and Director of the Award-Winning Documentary “Bullies and Friends;” Trish Behnke and Tracy Fentress, the mothers of 14-yr-old best friends Haylee Fentress and Paige Moravetz, whose double suicide pact due to bullying and harassment shocked the nation; April L. Vance, President and CEO of Advance Project; and Jowharah Sanders, Founder and Executive Director of NVEEE. Middle and high-school students, parents, teachers, administrators, counselors, support staff, faith-based communities, members of the lesbian, gay, bi-sexual and transgendered (LGBT) community, elected officials and policy makers have also been invited. The summit is free and open to the public. It will be held at the Modesto A. Maidique Campus, 11200 S.W 8th Street Miami, FL 33199 from 8:30a.m - 2:30p.m. Registration is required. To register, visit http://tinyurl.com/ksays7q. Click here to see a slideshow about the summit.

Just last week, I posted on a Connecticut court rejecting a student's cause of action under the state's anti-bullying statute.  In contrast, the Old Bridge School Board in New Jersey settled an anti-bullying case for 60,000 last week.  New Jersey's anti-bullying law is considered the toughest in the nation.  It was a response to the public outcry over the suicide of Tyler Clementi, a freshman at Rutgers University, in 2010.  The explicit mandates and clarity of the New Jersey law seems to have made all the difference.

This clarity has a huge upside statewide.  Knowing the risks of litigation, districts will respond quicker and more effectively to bullying.  Those who do not will suffer the consequences.  The trouble is discerning what amounts to "bullying" around the margins.  All "bullying" is serious and I, in no way, mean to minimize it.  Schools should be held accountable for the failure to stop it.  But some schools overreact and punish behavior that is not bullying.  From many schools' perspective, it is better to be safe (as in not get sued) than sorry.  This is the same approach we saw schools take with zero tolerance policies on weapons and drugs, which has lead to the expulsion of children with finger clips, butter knives in their lunch boxes, and tylenol in their purse.  New Jersey has apparently already seen some potential overreactions/over-broad applications with bullying. None of this is to find flaw in the law, but to point out the potential serious downside of applying laws without a good dose of common sense and judgment.  Unfortunately, those dreaded professional development workshops might be of some use here.

Cause of Action Rejected Under Connecticut's Anti-Bullying Statute

In 2002, the Connecticut Legislature enacted an anti-bullying statute that directed schools to come up with policies and procedures to address and prevent bullying.  In the wake of high profile bullying incidents that led to the victims' suicide or other serious harm, Connecticut reenacted and strengthened the statute in 2011.  The current statute broadly defines bullying and harassment and provides that "Each local and regional board of education shall develop and implement a safe school climate plan to address the existence of bullying in its schools." Conn. Gen. Statute 10-222d. It further specifies 17 different responsibilities, structures, and procedures that must be included in the plan and complied with. Id.  The statute does not include an explicit cause of action.

Some prior courts had addressed the existence of cause of action under the old version of the statute, but Mazzo v. Town of Fairfield Bd. of Educ., 2013 WL 4872203 (Sup. Ct. of Conn. 2013), appears to be a case of first impression regarding the newly enacted version of the statute. Plaintiff's primary argument appeared to be that Conn. Gen. Statute 10-222l evidences intent to create of cause of action because, while that section speaks to immunity, it conditions that immunity on good faith compliance with the statute.  In other words, plaintiff argues that a basic failure to attempt to comply with the Act is not granted immunity and, thus, is actionable under the act.