Maryland, Once a Surprising School Funding Success Story, Is Heading Back to Court

Maryland was one of our school funding success stories, and an oddball of sorts.  The first part of the story follows the script.  In 1994, Baltimore City plaintiffs filed a lawsuit against the state of Maryland, alleging that state funding was insufficient for student to receive an adequate education.  The trial judge held that the plaintiffs had stated a valid claim.  But on the eve of trial, the story turned. Maryland did what almost no other state has.  It settled and agreed to a consent decree under which it would develop a management and student achievement plan for the schools and substantially increase funding in the Baltimore City Schools: $30 million more in the first year and then $50 million more in each of the following four years.
In 2002, Maryland went one step further.  Based on recommendations by the Commission on Education Finance, Equity, and Excellence ("Thornton Commission"), Maryland implemented an entirely new funding formula designed to ensure that schools and school systems have the resources necessary to provide every child with an adequate and equitable education.   The formula paid special attention to meeting the needs of low-income, special education, and limited English proficiency students.
Plaintiffs are now alleging that the state has slipped back into its old habits and is failing to fund its education formula.  In 2008, the state stopped funding inflation increases, creating a large funding gap over the last decade.  Based on the existing funding formula, the gap is at least $1.6 billion statewide.  A state sponsored study by Augenblick, Palaich and Associates found that the gap between current spending and what is necessary for adequate education outcomes is actually even larger.  It recommended in 2016 that school funding increase by $2.9 billion – $1.9 billion from the state and $1 billion from local governments.  Below is a chart from that report showing the gap for Baltimore schools and others. 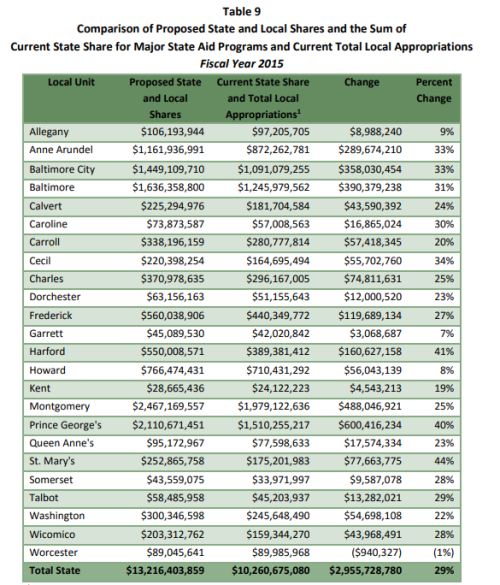 Last week, plaintiffs in the original Baltimore case moved to reopen their case.  The ACLU, which is litigating the case on behalf of the plaintiffs, offered the following in its press release:
According to the state Department of Legislative Services, the gap between what was judged by the State to be required for the Baltimore City Public School System (BCPSS) to provide a quality education and what was actually funded – was $290 million in FY 2015. An independent analysis mandated by the General Assembly for that year found BCPSS deserved $358 million. Over time, Baltimore City students have been deprived of over $2 billion in constitutionally required funding.
These numbers affect tens of thousands of children in Baltimore City schools, most of whom are Black and Brown and whose families live in poverty. Stefanie Croslin’s 13-year-old son, Cohen, loves science, but his school does not have Bunsen burners or an eye wash station, much less the advanced computer technology available in neighboring Baltimore County. Teachers, instead, have had to collect materials donated by parents to design experiments. Ms. Croslin worries what will happen if he never receives the learning necessary to succeed in college. Similarly, her younger son, 11-year-old Cyrus, was devastated when his school had to cancel music class. It was his favorite subject.
Most parents of children in Baltimore City schools have stories like these. Angela Gant’s younger daughter, 14-year-old D’Nyah, used to excel in math, but she recently began to struggle. Ms. Gant wants to help her, but her school no longer offers the tutoring services that were available when her older daughter graduated. Deshawna Bryant has sickle cell anemia and spent a week in the hospital after a day in an unheated classroom last winter. These problems mirror those highlighted when the Bradford case was originally filed, almost a quarter of a century ago.
“I would like our leaders to know that students in Baltimore also have a dream, and just because some of us aren’t rich enough to have those dreams come true doesn’t mean they should be taken away from us,” said Deshawna Bryant, a senior at City College High School in Baltimore. “The fact that we don’t have heating or air conditioning or all this funding, takes away from those dreams and it makes it harder for people to want to go to college.”
The plaintiffs in Bradford v. Maryland State Board of Education, a case pending in the Circuit Court for Baltimore City, are a class of parents of students attending public schools in Baltimore City, represented by the American Civil Liberties Union (ACLU) of Maryland, the NAACP Legal Defense and Educational Fund (LDF), and BakerHostetler. In 1996, the Circuit Court in Bradford declared that students in Baltimore City were not receiving the “thorough and efficient” public school education to which they are entitled under Article VIII of the Maryland Constitution.  In later rulings, the Court repeatedly found that the State was continuing to violate its constitutional duty to Baltimore City students, including providing insufficient funding for an adequate education, as judged by contemporary standards.
“Our children cannot wait any longer,” said Dana Vickers Shelley, Executive Director of the ACLU of Maryland. “For decades, the State of Maryland has abdicated its responsibility to provide adequate funding for both instruction and to address the abysmal physical condition of school facilities in Baltimore City.”
Baltimore City’s school buildings are by far the oldest in the state. Over 80 percent of the system’s 158 schools are in “very poor” or “poor” condition. The well-documented problems include lack of drinkable water due to un-remediated lead in water pipes, ancient boiler systems, roofs in need a replacement, and deficient electrical and fire safety systems.
“For decades the State of Maryland has allowed Baltimore City schools to deteriorate, failing to provide the needed funding to give thousands of African-American and Latinx students the quality education they deserve,” said Ajmel Quereshi, LDF Senior Counsel. “The State must take meaningful action to ensure that Baltimore City schools are safe, functional, and have the adequate staffing and infrastructure in place so students can learn and thrive.”
Baltimore lacks the resources that other jurisdictions of comparable size use to supplement their school maintenance and construction budgets. This means Baltimore must pay for many emergency repairs and renovations to facilities out of its operating budget, which unavoidably diverts dollars from instruction. In addition, many Baltimore schools also lack the range of specialized facilities necessary to meet contemporary educational standards, such as computer and STEM-related facilities and art, music, and after-school programs. Taken together, this drain on already meager funding resources exacerbates the constitutional “adequacy gap” in an area where a majority of the students are Black, Brown and from families with low-incomes.
The ACLU has worked to ensure that the needs of students in Baltimore City – and other jurisdictions that have higher concentrations of poverty and majority Black and Brown student enrollments – are fully funded in the recommendations of the State’s Commission on Innovation and Excellence in Education, the “Kirwan” Commission. But the Kirwan Commission has repeatedly delayed its final report and the funding needs of students in Baltimore City seem unlikely to be fully addressed during the 2019 General Assembly.