The Fundamental Right to Education

After finishing that research and having time to further reflect on it, I began to question how exactly a modern court would deal with this history.  There is no constitutional compromise doctrine, no republic form of government standard, no development of the rights of state citizenship.  So I began to dig further and came upon yet additional problems and concerns.  The foremost is that those who enacted the 14th Amendment thought about rights far differently than us.  Their thoughts on how best to protect those rights was also far different.  The main effect and purpose of the 14th Amendment was not to grant courts authority, but to give Congress authority.  With the 14th Amendment, Congress's prior civil rights legislation would be on strong footing and Congress could pass far more.  In short, the primary protection for life, liberty, property, due process, equal protection, and privileges and communities would come from Congress.  This is not to say courts were not important too, but to emphasize that Congress power was more important.

This frame of reference is all but lost in modern doctrine.  The Court has declared itself the final arbiter of 14th Amendment protections and will override Congress when it deems it appropriate.  The Court has also all but read privileges and immunities out of the Constitution.  On the other hand, the Court has read substantive due process into the Constitution.  The reading in of that concept, ironically, operates as tool to fix the Court's other doctrinal errors.  It allows the Court, albeit awkwardly at times, to bridge the gap between our modern way of thinking about rights and what the nation actually did and expected when it ratified the 14th Amendment.

With that in mind, I said "to heck with Constitutional Compromises."  What would substantive due process do with the historical events I unearthed in my prior research and what additional questions might substantive due process ask?  What emerged was a second article, The Fundamental Right to Education.  I saw a lot of other historical events in a new light by asking those questions.  I also discovered legislative action that had previously eluded my attention.  My abstract offers this summary:

New litigation has revived one of the most important questions of constitutional law: is education a fundamental right? The Court’s previous answers have been disappointing. While the Court has hinted that it might recognize some minimal right to education, it has thus far refused to do so.

This Article also defines the scope of a right to education with historical evidence. It demonstrates that the original purpose of public education was to prepare citizens to participate actively in self-government. In the mid-nineteenth century, this required an education that prepares citizens to comprehend, evaluate, and act thoughtfully on the functions and policies of government.

This picture of the Northwest Ordinance of 1787, which predates the US Constitution, is worth a 1,000 words, even though it only includes less than 100.  The Northwest Ordinance, moreover, is one of just a couple of foundation documents printed as the preface to the official version of the Unite States Code. It stands alongside the Declaration of Independence and the Constitution 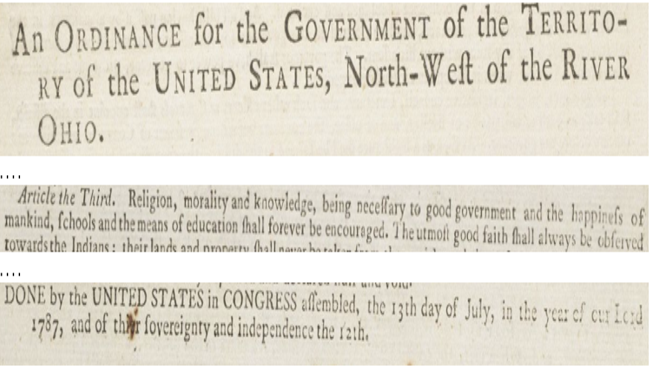 My article is forthcoming in the Notre Dame Law Review.  Get the current draft here.