International Body Confirms It: Our School Segregation Problem Is Dragging Student Achievement Down

Organisation for Economic Co-operation and Development just released its report on education equity and mobility.  The results for the United States aren’t pretty.  For those unfamiliar, the report analyzes massive amount of data and makes international comparisons.  The organization is comprised of representatives from 36 different member countries.

As to the United States, these two findings struck me as particularly poignant:

All Signs Point Toward a Constitutional Problem in Virginia's Education System 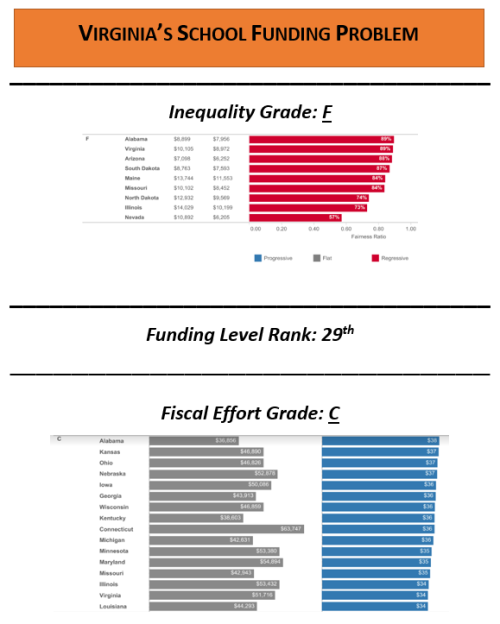 Education advocates have struggled to force Virginia to live up to its constitutional duties.  And as a result, the state has had carte blanche to mistreat its public schools.  It is little surprise that the most recent School Funding Fairness Report rates Virginia’s school funding as an “F” in terms of directing funds to needy students.  And while it is a relatively wealthy state, its overall spending levels are relatively low.  The tide may very well turn soon.  But first, a little background is in order.

Virginia’s constitution includes one of the strongest endorsements of public education you can find.  It provides that the “General Assembly shall provide for a system of free public elementary and secondary schools for all children of school age throughout the Commonwealth.”  In other words, the public education system is non-negotiable.  There is a constitutional duty to provide it.  In addition, that same section of the constitution provides that the “educational program of high quality [should be] established and continually maintained.”   The constitution gets even more specific, stating that the State Board of Education “shall . . . prescribe[e]” the “standards of quality for the several school divisions.”  Thus, the constitution says the precise definition is not to be left to chance. It is the Board’s duty to prescribe these high quality standards.

But some would argue there is a catch.  That constitution says General Assembly “shall seek to ensure” the education program and “determine the manner” in which it will fund the schools, which leaves the General Assembly some discretion.  In Scott v. Commonwealth, plaintiffs sought to test out these education clauses and challenge unequal funding in the state.  The Virginia Supreme Court rejected the challenge, holding that the constitution does not guarantee “equal” or “substantially equal” school funding.  That decision has scared advocates away ever since.

The Days of Charter Schools and Vouchers Are Numbered 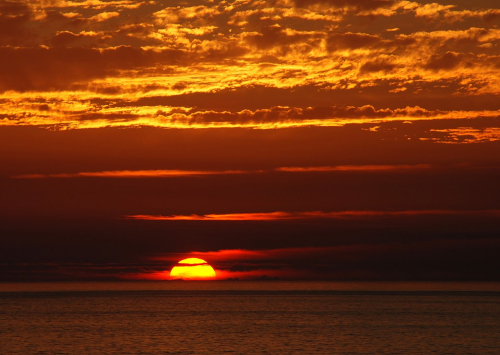 If you were trying to make a buck on the side and were pretty sure that some new or improved technology would drastically undercut the market for cell phones within five years, would you invest in Apple stock or look for other opportunities?  Well, that is the type of information I have for the Koch Brothers and Devos families of the world.  Invest your money elsewhere.  Vacate the Secretary of Education’s office.  The days of charter and voucher growth are numbered.  And regulation is coming to those charters and vouchers already in place.

Why am I suddenly confident, rather than nervous, about charters and vouchers?  I got the chance to meet and listen to teachers from across the country at the Network for Public Education’s annual conference in Indianapolis this past weekend.  For the first time in my professional career, I had a firm sense of public education’s future.  I have litigated and participated in several civil rights and school funding cases, dealt with lots of different advocates, and watched closely as the teacher protests unfolded this spring.  In Indianapolis, I saw something special—something I had never seen before.

I saw a broad based education movement led not by elites, scholars, or politicians, but everyday people.  Those everyday people were teachers who were not just from big cities, small cities, suburbs, or the countryside, but from all of those places and as diverse as America’s fifty states and ten thousand school districts.  The teachers weren’t just young or old, white, black or brown, men or women, straight or gay. They were all of the above.

Education law job opportunities at places like the NAACP LDF, MALDEF, the Lawyers' Committee and the Southern Poverty Law Center don't come around that often.  The same is true of the Education Law Center, the nation's premier education funding and quality organization.  Yesterday, I received notice that the Education Law Center is hiring a staff attorney.  Below is the posting:

Someone Is Doing the Department of Education's Job for It, Thank Goodness

A decade ago, I founded the Education Rights Center at Howard University School of Law.  One of my driving motivations was the notion that everyday people needed basic information about their schools and rights.  There was a plethora of data embedded in databases and spreadsheets, and there was a ton of great social science research out there reaching conclusions about that data.  It seemed to me that the best entity to make sense of all of this was the U.S. Department of Education.  After all, the vast majority of this data is compiled and managed by the Department.  And a great deal of the research was either funded by the Department or housed in its clearinghouse website.

It was also my sense that the Department did next to nothing to be of help to everyday folks.  Only sophisticated researchers could do anything with the data.  For those who haven't waded into the Department's databases, it suffices to say that the data is "raw."  Simply looking at that data tells you next to nothing, unless you are just wondering how many students go to a particular school, how many teachers the school has, how many minority students attend the school.  That information, however, is practically meaningless.  It only has meaning when you place it in context.  For instance, you know elementary school X has 542 students, but what is the average size of an elementary school?  The website won't tell you.  So what do you really know about the school.  Similarly, you know how many minority students attend the school, but what is the percentage of minority students in the school?  It won't tell you that either.  You have to calculate the percentage yourself by combining the raw data.

I could go on, but the point is that the Department wasn't telling parents and students things they might want or need to know, particularly if they thought something was wrong with their school or they were just curious.  I quite simply thought it a disgrace that our Department of Education couldn't put its vast resources to work to make its data somewhat helpful for everyday people.  If it did that, it might put folks in a better position to protect their own rights.

The Fundamental Right to Education

A somewhat related case in Connecticut has gone almost entirely unnoticed.  Last week, a federal judge reached almost the same exact conclusions as the judge in Michigan.  The Connecticut judge held there was no federal fundamental right to education.  The Supreme Court had foreclosed such a right in San Antonio v. Rodriguez, reasoned the judge.  But plaintiffs had argued that San Antonio had left open the possibility of a right to a minimally adequate education.  The district court responded:

In Rodriguez, the Supreme Court did not leave the door open for federal courts to recognize a fundamental right to a minimally adequate education. To the contrary, the Court rejected the idea of a fundamental right to education, without parsing how effective or adequate the education might be, because such a right is not guaranteed in the Constitution. Moreover, in Plyler, the Court cited Rodriguez’s holding for that proposition.

On that score, I think the court is wrong and conflating the distinction between a fundamental right to education and a fundamental right to a minimally adequate education.  A minimally adequate education raises a host of different questions and rationales.  The district court did not address them.  Scholars, however, have, and no Supreme Court cases has rejected those possibilities. To the contrary, it has left them open.  My recent work, in painstaking detail, lays out the historical basis for recognizing such a right or something similar to it.  But I warned that if the best argument plaintiffs had in these cases was "Rodriguez leaves open the issue," they would be in trouble.  They need an affirmative explanation for courts to go out on a limb.  I believe I offer that affirmative explanation.  But that is another story.

After years of stalled progress, underway in North Carolina aimed at moving the State to fulfill its constitutional duty to adequately fund public education. In response to a joint request by the parties in the landmark Leandro v. State litigation, Superior Court Judge David Lee has ordered WestEd, an independent consultant, to conduct an in-depth study and make recommendations to remedy the constitutional violations found in the Leandro case through the provision of constitutionally adequate resources for all North Carolina public schools.

In 1994, parents, students and school districts in low-wealth rural counties filed Leandro v. State, alleging students in these counties were being denied their right to an adequate education under the North Carolina constitution. In 1997, the North Carolina Supreme Court permitted the case to proceed to trial, declaring that all students in the state are entitled to "the opportunity to receive a sound basic education." After trial, the lower court found in 2002 a violation of the students' right to a sound basic education and ordered the State to remedy the violation by providing:

Suspensions for Students Who Don't Pledge of Allegiance, What Is Texas AG Thinking? 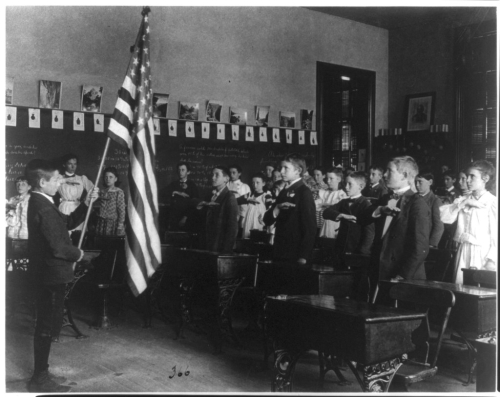 A dispute over the pledge of allegiance in a Texas High School is shaping up to be very interesting, mainly because of the strange position the state's Attorney General is taking in support of the school district.  A slip opinion from the federal district court offers this summary of the facts:

India Landry is an African American student who attended Windfern High School (“Windfern”) in the Cypress Fairbanks Independent School District (“Cy Fair ISD”). . . .  Windfern is a “Campus of Choice,” which Cy Fair ISD students may attend upon application and the recommendation of the home campus assistant principal and counselor. At other schools in Cy Fair ISD, India had sat for the Pledge of Allegiance (the “Pledge”) “around 200 times.”

On October 2, 2017, India was in Principal Strother’s office when the Pledge was recited. India remained seated. In response, Principal Strother “immediately expelled India from school” by saying, “Well you’re kicked outta here.” Assistant Principal Penny Irwin-Fitt called India’s mother, Kizzy Landry, and gave her five minutes to pick up India or the police would escort India from school. While India waited, administrators made hostile remarks to her. Ms. Fitt said India would stand for the Pledge like the other African American student in her class. The secretary, Karen Walters, said, “This is not the NFL.”