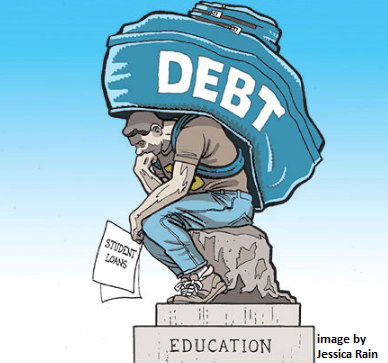 In case you missed it, Betsy DeVos recently got a judicial smack down in the battle over student protections in loan repayment.  I won't rehash the merits of the competing student loan policies here.  You can find that elsewhere.  But it is worth emphasizing exactly why DeVos lost and its implications for other administrative actions.  Those two things are extremely important in thinking about the future of the broader landscape of education policy.

The short story is that when an agency seeks to reverse or block an existing or pending regulation, it needs to either go through the normal process of passing new regulations (which takes a while) or, in the case of stopping pending regulations, offer a legitimate explanation. DeVos's action on student loan regulations failed because the Department did not explain itself in any rational way.  Rather, it seemed to use a lawsuit by a group of colleges as an excuse to simply do what it wanted to do--exercise raw power in favor of a particular policy agenda.  That, the court demonstrated, you cannot do.

Second, the court offered an interesting analysis of how a 180 degree reversal of policy requires a little something extra.  The court's analysis was compelling.  It is fine for an agency to enforce the law within the bounds of its discretion.  But when it completely reverses a policy position, it begs the question of whether one of the two agency interpretation is simply wrong.  The public deserves a reasoned explanation of why the prior one was wrong.  Again, it is not enough to simply say: "I'm in power now."  This analysis, in particular, strikes me as being important to other policy fights to come, particularly since this Administration says it wants to entirely remake or end the federal role in education.

Okay, so enough on the commentary, what exactly did the court say?  To appreciate the conversation, a little background is in order.

The Higher Education Act of 1965 (“HEA”) empowers the Secretary of Education make financial aid available to college students.  It also requires institutions of higher education that seek to participate in the loan program to “enter into an agreement with the Secretary of Education, which may include any provisions ‘the Secretary determines are necessary to protect the interests of the United States and to promote the purposes of’ the Direct Loan Program.”  The law also gives the Secretary the authority “to make, promulgate, issue, rescind, and amend rules and regulations governing the” loan program. Finally, the Secretary is required to enact regulations that identify problematic behavior by colleges and universities that students may use a “defense to repayment of a loan.”

In 1994, the Secretary passed regulations identifying the behaviors and circumstances that would give rise to a student’s defense.  On defense was if the college or universities behavior amounted to a violation of state law, so fraud and misrepresentation, for instance, might be a defense.  If the student succeeds in the claim, it would shift the obligation to repay a student loan from the student to the school.

The collapse of Corinthian Colleges in 2015, however, exposed potential weaknesses in these regulations and the Department took action to revise its regulations.  The new regulations, as the court explains,revised the procedures for student borrowers seeking to discharge their federal loans as a result of school misconduct; (2) revised the processes for students seeking other forms of debt relief; (3) required “financially risky institutions [to be] prepared to take responsibility for the losses to the government for discharges of and repayments for [f]ederal student loans;” (4) expanded the disclosure obligations of institutions “at which the median borrower has not repaid in full, or made loan payments sufficient to reduce by at the least one dollar the outstanding balance of the borrower's loans received at the institution;” (5) altered the standard for students asserting a “borrower defense” to collection actions; (6) expanded the situations in which the Department could proactively forgive loans in groups, rather than upon individual applications; and (7) prohibited schools “participating in the Direct Loan Program from obtaining” or relying upon a borrower's “waive[r] [of] his or her right to initiate or participate in a class action lawsuit,” or “from requiring students to engage in internal dispute processes before contacting accrediting or government agencies.”

Those new regulations were to go into effect on July 1, 2017.  In response to a lawsuit by the California Association of Private Postsecondary Schools asking that DeVos block those regulations, Betsy DeVos delayed their implementation to 2018 and then later delayed them again to 2019.  That pause then lead student to challenge the legality of DeVos’s action to unilaterally stop regulations that had already been duly enacted and set to take effect.

The Court found that DeVos exceeded her authority.  There is a lot that permits agencies to stay regulations like those above, but the agency can only do so under certain circumstances.  The court explained that the relevant statute, “Section 705,”

does not permit the Department to make its own untethered assessment of what is “just.” . . .  The administrative determination that “justice ... requires” issuance of a stay is the same type of determination that courts make when they decide whether to grant preliminary injunctive relief. The legislative history of § 705 makes just this point. It explains that “[t]he authority granted is equitable and should be used by both agencies and courts to prevent irreparable injury or afford parties an adequate judicial remedy.” . . . . This includes, but is not limited to, “balanc[ing] the competing claims of injury,” “consider[ing] the effect on each party of ... granting” the stay, and “pay[ing] particular regard for the public consequences.” At a minimum, an agency must provide a “reasoned explanation” that is sufficient to “enable ... court[s] to evaluate” whether a stay was “require[d]” to “afford parties an adequate judicial remedy,” S. Doc. No. 248, at 277—that is, to ensure that the prevailing party in the pending litigation would ultimately obtain meaningful relief.

[T]o justify a stay under § 705, an agency must do more than pay “lip service” to the pending litigation , or merely assert, “without any specificity,” that the litigation raises “serious questions concerning the validity of certain provisions of the [r]ule.” Although the agency need not adhere to the specific contours of the four-factor preliminary injunction test, it must weigh the same kinds of equitable considerations that courts have long applied and must explain why, in light of the pending litigation, a stay is “require[d]” to ensure the parties will ultimately obtain an adequate and just judicial remedy.

So the simply answer to why DeVos just lost this blockbuster case is that she did not bother to offer those explanations and reasons.  She appears to simply have blocked the regulations because she was siding with the colleges over students.  The court wrote:

the Department's invocation of § 705 was arbitrary and capricious. The Department offered three rationales: the CAPPS litigation raised “serious questions” about the validity of the Borrower Defense Regulations; the delay would not cause the government any significant harm; and the Department was, in any event, reconsidering the regulations. Section 705 Stay, 82 Fed. Reg. at 27,621. None of these reasons withstands APA scrutiny. As explained further below, the first rationale is mere boilerplate; it is unsupported by any analysis, and it is at odds with the Department's prior conclusion to the contrary. The second and third rationales also lack any meaningful analysis and, more importantly, are unrelated to the pending CAPPS case and are thus beyond the scope of the relevant § 705 considerations.

One of the Department’s explanations for its policy change was that “if the final regulations are not postponed, institutions would be subject to financial responsibility trigger provisions that could impose substantial costs.”  But the court explained that this was illegitimate on its own:

The mere fact that parties would avoid the costs of complying with the existing regulations, however, is plainly insufficient to support a § 705 stay. As explained above, § 705 requires an agency to explain why, in light of the pending litigation, a stay is necessary to ensure that the parties ultimately obtain adequate and just relief.

Although it covers twenty-two sections of the Borrower Defense Regulations, the Department never identifies whether a few, many, or all of these sections rest on legally questionable footing. The notion that the Department needed to stay the effective date of all twenty-two of these provisions—while exempting a handful of ministerial provisions—moreover, is difficult to square with the fact that CAPPS itself sought a preliminary injunction only with respect to the arbitration and class action provision. Although the Department was not required to apply the four-factor test that courts apply, it was required to apply something akin to it—some standard that ties the stay to ensuring that the outcome of the pending litigation affords the parties adequate and just relief and that balances the relevant equities. The Department, however, offers no explanation for why it was necessary to stay twenty-two sections of the final rule.

Moreover, the provisions of the Borrower Defense Regulations that the Department did identify are, at best, mentioned only in a perfunctory manner. The Department observed, in passing, that “if the final regulations are not postponed, institutions would be subject to financial responsibility trigger provisions that could impose substantial costs,” Section 705 Stay, 82 Fed. Reg. at 27,621, but it failed to tie that observation to the litigation in any way, and it failed to consider how the public interest or the interest of student borrowers would be affected by its decision. It offered slightly more detail regarding the arbitration and class action provision, but, again, the Department simply asserted, without analysis, that CAPPS had “raised serious questions concerning the validity of” the provision and that postponing the effective date would save institutions the cost of making changes to their contracts “while the regulation is subject to judicial review.” Id. The arbitrary and capricious standard of the APA, however, requires that agencies “provide an explanation that will enable the court to evaluate the agency's rationale at the time of decision.” To justify a § 705 stay, an agency must, in short, do more than simply assert—without elaboration—that the litigation raises unspecified “serious questions” for resolution and that a stay will save regulated parties the cost of compliance.

The real kicker, however, was that the Department offered no explanation as to why the prior administration’s regulations were wrong and its new ones are correct.  Only one of them can be right and new administrations cannot simply make up new rules that are the exact opposite of old ones without justifying itself.  Otherwise, agencies could not really claim to be enforcing the law.  Instead, they would just be making it up as they see fit as they go along.  The court explained:

The problem with the Department's serious-legal-questions rationale, however, runs deeper than this. As with the Final Delay Rule, the Department failed to acknowledge, much less to address, the inconsistency between its current view that those provisions stand on legally questionable footing, and its prior conclusion that they were legally sound.

An agency is entitled, of course, to change its position, and, to do so, it need not even demonstrate that its current view is “better than [its] old one.” But an unacknowledged and unexplained inconsistency is the hallmark of arbitrary and capricious decision-making.

These last lines strike me as extremely important not just to student loan borrowing, but to education regulations in general and those outside education.  If the Trump administration seeks to remake the regulatory world, it must explain itself and offer plausible reasons for the change--something that the current Department of Education has struggled to do.  This warning shot could potentially cool the trajectory of the Department.