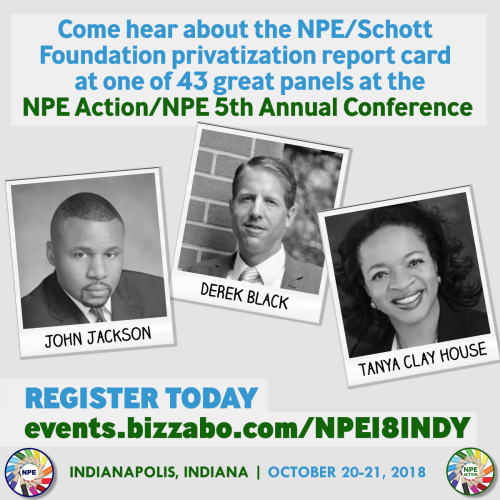 This summer, the Network for Public Education and the Schott Foundation released on new report on the privatization of public education titled, Grading the States: A Report Card on Our Nation’s Commitment to Public Schools. The report was the one I had been waiting for. It filled in key facts that have been missing from the public debate and will help move it in a more positive direction. The Network's national conference on October 20 to 21 will feature a panel on the report.  John Jackson, President of Schott, and Tanya Clay House, a long time civil rights advocate and former Obama appointee, will be on the panel along with myself.  Registration for the event is still open here.

The panel promises to be an important one.  As I argue in Preferencing Educational Choice: The Constitutional Limits, the analysis of charter schools and vouchers needs to be reframed.  Toward that end, I identify a handful of categorical ways in which states have actually created statutory preferences for charters and vouchers in relation to traditional public schools.  I explain why a statutory preference for these choice programs contradicts states’ constitutional obligations in regard to education.  I also explain how, even if there is no statewide statutory preference, choice programs can have the effect of undermining the delivery of adequate and equitable education opportunities in particular locations.  When they do, the programs violate state education clauses. We just have to examine the facts on a case by case basis.

My research, however, analyzes the issues from a relatively high level of abstraction, highlighting problematic examples in particular states and districts and synthesizing constitutional principles from various states.  The NPE/Schott report drills down into the facts deeper than anyone before.  It offers a systematic examination of charter and voucher laws in each state.  As a result, it clearly shows the extent to which each state’s laws represent a decommitment to public education.

The report is the “yin” to the National Alliance for Public Charter Schools’ “yang.” Each year, the National Alliance for Public Charter Schools (NAPCS) releases a report detailing charter school laws, with the frame of reference being the extent to which states have law that promote the expansion of charters.  The report normatively assumes that charter schools are good and state laws that overly restrict them are bad.  So the states that it labels as having excellent charter school laws will probably fair poorly on the Network for Public Education (NEP)/Schott Foundation report.  For instance, NAPCS ranks Indiana as the top state for charters, but NEP and Schott rank Indiana in the 40s.

But that is what makes this report so important.  Because there hasn’t been any systemic to response to NAPCS’s reports, it has been able to skew the conversation. This new report brings balance.

Here are some key paragraphs from the executive summary:

Public schools remain a source of pride and hope, helping to level the playing field for children from incredibly diverse racial, ethnic, religious and socioeconomic groups. Even amid concerns and often unsubstantiated criticism, Americans continue to view public schools as a defining hub for their communities. In the spring of 2001, a national poll found that Americans ranked public schools as “the most important public institution in the community” by at least a five-to-one margin over hospitals, churches and other institutions. Nonetheless, within the past two decades, there has been a fervent push by those interested in privatization who seek to de-prioritize the importance of public schools and effectively undermine their functionality. Ignoring these attacks, most parents and citizens understand that public schools provide a critical service to American society by educating the majority of students with a base level of accountability while protecting their civil rights in the classroom. Moreover, a recent poll conducted in October of 2017 found that among all registered voters, only 40 percent supported vouchers while 55 percent are opposed. This number further decreases to 23 percent with opposition at 70 percent when voters were asked to consider support if it meant less money for public schools.

With the ongoing debate on the relevance and benefit of public schools versus private schools, the historical context of this debate must be understood. The commitment to a free education for American children has its roots in the 17th century and has evolved along with the laws of the nation to include a free and appropriate public education (FAPE) for all children. Those of privilege have always understood that education is the cornerstone to success and inclusion in society. Yet the reality is that disadvantaged groups including African Americans, Latinos, Native Americans, women, the poor, those with disabilities and others have always had to fight for inclusion. For many generations, structural racism inherent in American society maintained a segregated system for African Americans and people of color. From passage of Massachusetts’s first compulsory education law to present day, historically disenfranchised communities have fought for the right to receive a free education.

The public education system was developed to serve all children and can continue to do so with the appropriate support from the federal, state and local levels. Public schools offer a rich opportunity for all children to learn from their peers of other racial, ethnic, religious or other identities. Private schools, including charters, were not created to serve all children. Although parents always have a right to send their children to private schools at their own expense, they are not and never can be the model for educating of all this nation’s children, nor should they be supported by public dollars.

The report evaluated education privatization based on the following, assigning numerical values to each:

Overall grades were assigned based on the extent of privatized school choice in the form of vouchers, neo-vouchers and charter schools, as well as the quality of the state’s laws that promoted accountability, oversight, transparency and civil rights. States earned an. The states with the best overall grades for resisting school privatization are predominantly rural states with a strong commitment to community public schools and an aversion to public dollars leaving already cash-strapped rural schools[, although]... rural state support for public education is not a universal pattern.

In addition to giving each state an overall grade, we assigned grades for voucher and charter policies as well. There are 22 states that earned an A+ for resisting attempts to give public funds in the form of vouchers and/or neo-vouchers to their public schools.

The six states with an A+ for their charter laws are Montana, Nebraska, North Dakota, South Dakota, Vermont and West Virginia. However, there were also 37 states plus the District of Columbia that received a Grade of F based on their charter laws — states that embrace for-profit charter management, weak accountability and other factors that make their charter schools less accountable to the public.