Duncan and DeVos Are Both Wrong, We Need Old-School Reform 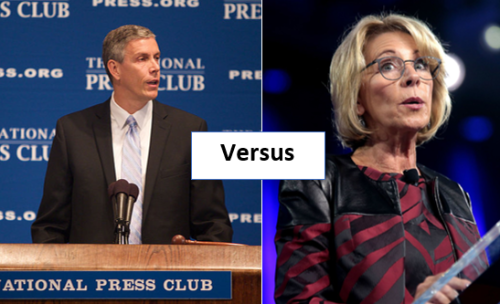 Former Secretary of Education Arne Duncan spent the last few months trying to rehabilitate his work and distinguish it from DeVos. This spring he implored us to ignore current claims that education reforms of the past have failed.  On his book tour, he has been arguing that “education lies” often drive education policy. Yet, Duncan was an extremely disappointing Secretary Education who too often fell victim to the education lies himself: money does not matter, ineffective teachers are ruining public schools, charter schools will outperform public schools, and federal leadership on rigorous standards will save us all.

To his credit, Duncan believes in public education and gets a lot right in his current critiques.  He is a strong advocate of prekindergarten education and poignantly says that presidential elections show that Americans love their guns more than the love children.  Yet, Duncan refuses to be candid about his own mistakes. So he feeds the idea that the current problem in education, like every other public policy problem, is the Trump Administration. Our education reform problems, unfortunately, are more endemic than the current administration.  They need better solutions than rose-colored glasses.

The “education reforms” that Duncan says worked—desegregation and more equalized school funding—preceded his tenure as Secretary.  He did nothing to further those reforms.  Instead, he routinely pushed through reforms that didn’t work.  An honest appraisal of the past decade reveals that Duncan caused more harm than good.

Secretary Duncan created the Race to the Top grant program and offered states money in exchange for major policy changes. In the aftermath of the recession, he could demand almost anything he wanted. He got states to do three things: adopt new teacher evaluation systems that they could use to hire, fire, and promote teachers largely based on statistics; expand charter schools; and adopt college and career ready standard, aka Common Core. Two years later, Duncan doubled down.  He told states that he would waive their pending sanctions under No Child Left Behind if they got on board with the policies he had promoted in Race to the Top.

What Duncan didn’t do is also notable.  He stood by while states implemented the biggest and most sustained education funding cuts in decades. And other than a 2011 letter to the editor, he largely stood by while our schools continued to resegregate to levels the nation hadn’t seen since the 1970s.

Duncan’s legacy lives on today.  His teacher evaluation systems and his cozying up to the attacks on teacher tenure helped drive teacher moral to an all-time low.  It was those policies that led to a national teacher shortage.  This spring’s protests were simply the visual manifestation of a decade of neglect.

Duncan’s policies also unleashed charter growth that is proving extremely hard to control or unwind.  Seeing how far charter school expansion had eaten into the basic ability of public education to do its job, groups like the NAACP finally felt the need to call for a moratorium on charter schools.  Seeing how charters had helped fuel segregation, groups in Minnesota and New Jersey filed state constitutional claims.  The Southern Poverty Law Center just filed a lawsuit arguing that charter school funding practices violate the state constitution.

Finally, Duncan’s willingness to overstep his bounds in pursuit of his brand of reform created the narrative that made Betsy DeVos possible.  Senators, congresspersons, states, districts, and parents all railed against his aggressive approach.  Then, Donald Trump campaigned heavily on the notion that Common Core was a disaster and that states should be making decisions, not the feds. DeVos accelerated that rhetoric to another level and further argued that parents have a “right” to school choice.  Those who disagree are “flat-earthers.”

Since then, President Trump has issued an executive order to decrease the federal role in education and eliminate what he calls federal regulatory overreaches.  DeVos took the directive and ran with it, repealing, for instance, policies that protect LGBTQ youth, promote school integration, and look for systemic problems when individuals file discrimination complaints.  Trump has even proposed eliminating the Department of Education as a stand-alone agency—the ultimate response to federal overreaches in Education.

The one area in which the Trump administration doesn’t mind leveraging federal power, however, is school choice.  The administration wants supercharge Duncan’s charter agenda and add vouchers to the mix. The Trump administration’s proposed 2019 budget would cut numerous public school programs, including one aimed at supporting teachers. It would use that money for $1 billion in new charter school and voucher grants.

The solution to our current education challenges is not to weigh the merits of DeVos’s brand of reform versus Duncan’s, but to recognize that neither has much merit.  They both have fed a perpetual cycle of reform that ignores our real problems: inequality and segregation.  Solving those problems doesn’t require fancy new reforms.

Schools to once again think seriously about how their student assignment policies affect segregation.  States can foster this by including integration and diversity as measures of school quality in their accountability systems.  And the federal government can provide technical assistance to help districts design new student assignment policies.  Both the federal and state government need to stop funding charter schools and vouchers that increase segregation.

The solutions for funding inequality are simple.  States need to replenish the funds that they have cut from education budgets over the past decade and direct larger shares of those new funds to the neediest districts.  The federal government needs to increase funding for Title I schools, particularly those with the highest concentrations of poverty.  Those may be radical solutions, but they aren’t new.

Curious if you have run across any best practices with regards to this piece of advice: "States can foster this by including integration and diversity as measures of school quality in their accountability systems." I actually recommended the same in a report I wrote in March (http://www.ncjustice.org/?q=education/education-policy-perspectives-stymied-segregation%E2%80%94how-integration-can-transform-north) but wasn't sure what the best statistic would be to describe the level of segregation for an individual school.