School quality and school discipline are intertwined.  As I explain in Reforming School Discipline, "[s]ocial science increasingly demonstrates that while student misbehavior is a function of individual choices that students make, individual student misbehavior is also a function of the school environment in which they learn and act. Quality schools and orderly environments consistently produce higher student achievement and less misbehavior. Low quality schools with disorderly, hostile, and punitive environments produce lower student achievement and higher rates of suspension and expulsion."  And as Bruce Baker, Kirabo Jackson, and official government reports establish, there is a direct link between school funding and school quality and student outcomes.

If we take these two basic insights about money and school discipline and throw some basic data points together, a pretty stark image emerges. This week, the ACLU and UCLA Civil Rights Project issued a new report on race, discipline, and school safety that gave me the tools to do just that.  They issued heat maps that show on a district-by-district basis how many students are suspended, whether there is a shortage of school counselors.  And earlier this year, Bruce Baker and his colleagues issued a report that measured school spending levels against what it would take for students in each district to achieve at average levels.

Side by side these maps nearly look like mirror images, even though they are measuring two seemingly different things.

The bright spots in the image on the left show districts with high rates of school suspension.  The yellow, orange and red spots in the image on the right show districts that are the most underfunded.  The dark blue on the left image and the green on the right image show the other end of the spectrum--schools with low discipline rates and high funding levels.  There are, of course, exceptions.  Texas, for instance, has a serious school funding problem, but relatively low discipline rates.  Although you can still see that within Texas, there are discipline problems in the southern and eastern part of the state, where underfunding is also a problem.

Here is what I found.  Those states and districts with high suspension rates (the bright spots on the map) tend to underfund their public education system.  Those with low suspension rates (states painted mostly blue) tend to fund their education system relatively well (which is still distinct from adequately).  The boxes on the states represent Baker's estimate of the extent to which the median districts in the state fail to provide the resources necessary for students to achieve average outcomes. 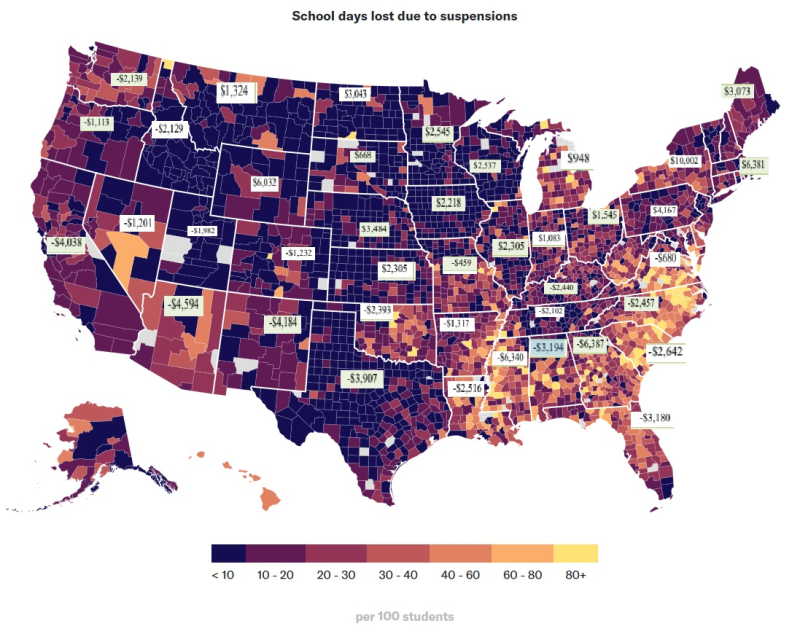 Conclusive evidence? Absolutely not.  Troubling enough that someone far more sophisticated than me should look at it more closely.  Absolutely.