Are New Laws Requiring the Posting of "In God We Trust" in Public Schools Constitutional? 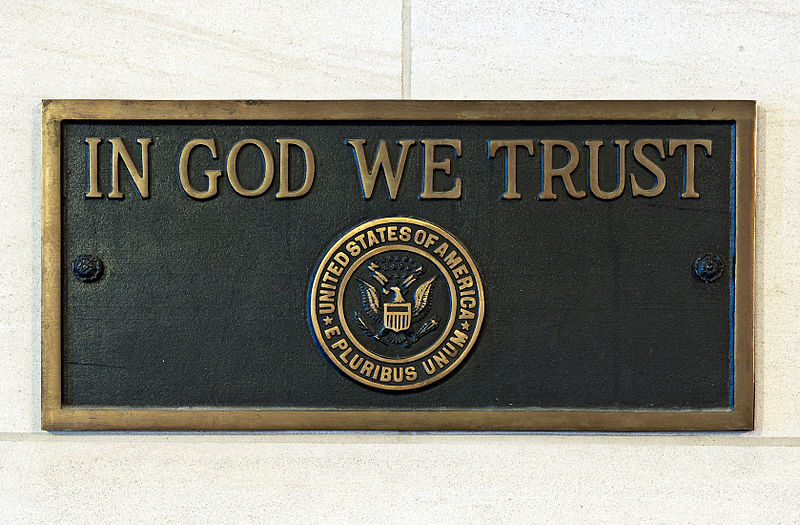 This fall, Florida public school students will go to school under a new banner.  Early this summer, the state passed a law requiring that

Tennessee recently passed a similar law and several other states have been considering doing the same.

On the one hand, the phrase was already on the Florida state flag, our national currency, and etched in various fora.  Yet, my reading of the cases suggests these new laws raise serious constitutional problems because of the goal they seek and new message they send.

Courts typically look at three major issues in religion cases: purpose, effect, and coercion. A religious purpose alone would make these new law unconstitutional. If the goal is to "put God back in schools," disclaimers to the contrary will not save the legislation.

NPR reported that the sponsor of the bill in Florida said this:

[T]he bill is "so simple, just saying put a poster up to remind our children of the foundation of this country."

Daniels said she had a vision earlier in the week, "I believe it was God, and I heard a voice say, 'Do not politicize what has happened in Florida and do not make this a thing of division.' "

Daniels continued to speak about God: "He's not a Republican and he's not a Democrat. He's not black and he's not white. He is the light. And our schools need light in them like never before."

The new conspicuous posting of the phrase may also have problematic effects, regardless of the intent. The average person who sees a new posting in school that proclaims "In God We Trust" would almost certainly see it as an endorsement of religion. Seeing that motto displaying conspicuously in several locations in a school would send an even clearer message. No other phrase or motto comes closes to holding that status. Nor to my knowledge has anything ever held that status. The only thing that comes close is the American flag, but of course, the flag is not a religious symbol. Yet, even with it, the Court has held, on other grounds, that schools cannot force students to participate in the pledge, with the idea being that it is beyond the power of schools to force students to accept or submit to idea. This applies to political as well as religious ideas.

Even more specific precedent bears on these postings. The Supreme Court and lower courts have struck down the moment of silence in Louisiana schools not because the moment of silence is generally objectionable, but because when Louisiana passed the the law, its purpose was to encourage prayer under the auspices of a moment of silence.  And the Court has struck down certain displays of the Ten Commandments in school because the particular way the school posted it sent a religious rather than secular message. The "In God We Trust" laws would seem to include both problems--a religious purpose and a religious effect.

Although not directly on point, the Ninth Circuit also decided a case involving a teacher who had put up two large banners in his classroom that read "In God We Trust," "One Nation Under God," and "God Bless America." The school ordered him to take them down and he claimed it violated his First Amendment rights. The Ninth Circuit held that the school could order him to take them down without violating his rights. It did not answer the question of whether the school could allow these banners if it wanted. But it stands to reason that the school correctly perceived the banners to be violations of the establishment clause, which is why it could order them taken down.

To be clear, there is an important exception to the case law. The state can display religious texts when there is a secular purpose and effect. This means that, as part of teaching history or legal lessons, schools can potentially display the Ten Commandments, but only if the Commandments are surrounded other secular materials that make it clear that the overall purpose is secular not religious. Placing the Ten Commandments aside just one other document is not enough to lead to this conclusion.

My suspicion is that lawmakers think there is a loophole because "In God We Trust" has been treated as what courts call a "ceremonial deism" in the context of U.S. currency and architectural fixtures. This area of the law is extremely difficult to reconcile with the generally applicable First Amendment standards. The simplest explanation is that the Court has said that the monetary and architectural references are not really religious statements. They are just utterances and mottos with no real meaning, but which we have stuck with through history for tradition sake, not to make a religious statement. Thus, they don't violate the First Amendment.

New uses of those mottos would appear different, particularly when used for the purpose of making a religious statement. Using the motto as a backdoor way to try to make a new statement is unlikely to fit the narrow "ceremonial deism" exception. Schools simply have not always had these postings in the past, which would indicate an effort to make a new affirmative statement.

About a decade ago, the former Attorney General of Georgia disagreed with the foregoing analysis. He pointed out that the motto has been sanctioned in other contexts, so there is no reason to suspect it would be different in school. He, however, does not take up all the factors and cases that make the classroom far different than the dollar bill and buildings that are a century old. He did acknowledge that he could be wrong--as do I.