Democrats New Multi-Billion Dollar Promise to Teacher Has Been a Long Time Coming; Shows Just How Much Power Teachers Have Now

Democrats are finally sympathetic to the plight of teachers.  This morning, Chuck Schumer and Nancy Pelosi penned an oped in the USA Today titled Democrats have a better deal for teachers and our kids, too.  They go on to outline a strong starting point for a better deal.  It's a five part platform:

Second, we will establish a new $50 billion fund for school infrastructure and resources. Students and educators deserve 21st century classrooms and up-to-date educational technology and materials. We tell children that education is important and send them a different message by putting them in substandard schools. Improving our nation’s school infrastructure will help retain our best educators.

Third, we will give additional support to initiatives that improve Title I schools serving low-income children, and ensure that all students have access to academic opportunities like computer science, music and civics. We need to provide all students with a well-rounded education to get them ready for today’s changing economy.

Fourth, we will protect teachers’ freedom to negotiate for better pay and conditions by safeguarding the right of public employees to join unions, collectively bargain, and engage in collective action to support each other. Currently, no federal law provides teachers and other public servants with collective bargaining rights. Democrats want to guarantee teachers the same freedoms that private sector workers have to negotiate collectively for a better deal.

Fifth, we will work to meet our federal commitment to fund special education. When Congress first passed the Individuals with Disabilities Education Act in 1975, the federal government promised to provide 40% of the excess costs of educating children with disabilities. We are not even close to that. Fulfilling our federal promise will not only help provide resources to students with disabilities, it will improve the quality of education for all students.

And they would pay for it by rolling back the recent tax cuts for the top 1%.

Sounds great, but excuse me for being a little grumpy and warning teachers to not rush blindly into the arms of Democrats.  It's for good reason.  First, the party looks like a Johnny-come-lately. When the teacher strikes began, some noted in frustration that the party leaders were no where to be found.  Tom Perez's support, for instance, was slow and tepid.  As the DNC Chair and former Secretary of Labor, many expected far more.

Second, the timing of the Schumer and Pelosi's op-ed is convenient to say the least.  The school year is nearly at its end and the biggest protests would seem to be behind us. And this robust support for teachers comes only after it has been confirmed as a purple issue. As Vox reports, "Support for raising teachers’ salaries cuts across party lines. Nearly 90 percent of Democrats, 78 percent of independents, and 66 percent of Republicans think teachers don’t get paid enough."

But I'll give the Democratic Party a pass on its timing.  Public education should be a bi-partisan issue. Had party leaders rushed to the front they might have undermined that.  Rather than a grassroots protest based on shared values, the protests could have become politicized, zapping teachers' strength and moral claims. Opponents tried their best to cast the protests as a Democratic ploy.  That they failed in this critique was because it was either false or the Democrats were smart enough to just stay out of it.  I think it was a little bit of both. 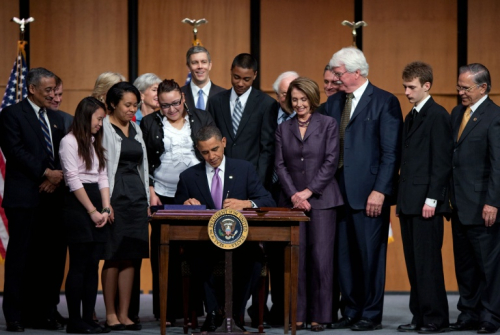 What I can't give the party a pass on is its failure over the past decade.  The party was complicit in much of what has happened to public education and teachers.  It was, after all, President Obama's Secretary of Education, Arne Duncan, that helped throw fuel on the fire of the war on teachers. He demanded that states adopt teacher evaluation systems that used students' standardized test scores to make high stakes decisions about teachers.  He was the one who applauded the trial court decision in Vergara v. California that declared teacher tenure and seniority rules unconstitutional.  Both the evaluation systems and the trial court decision later proved fatally flawed, but who's counting.  What really matters is that these were two key components of deflating teacher moral.

Duncan was also the one who told states that they would be ineligible for Race to the Top grants if they placed caps on the number of charters in the states.  Desperate for new resources in the middle of the Recession, the acted accordingly and charter school enrollments doubled.  As I detail here and here, states funded their charter and voucher programs by taking money out of the public school system.  This was the third party of deflating teacher moral and quality education.

It was also the Democratic party that gave states a pass in the aftermath of the Recession when states used stimulus funds to replicate school funding inequalities rather than close them.  One of the biggest chunks of the stimulus package was aimed at helping states pay teacher salaries.  Those funds helped delay massive teacher layoffs for a year or two. The least the federal government could have done is demand a little fairness and local effort in exchange, but they did not.  Once the federal money was gone, states allowed education funding to fall off a cliff.  Groups like the Education Law Center screamed at the top of their lungs to the Obama adminstration but no one heard their cries.

The fog of a recession understandably leads to missteps.  So maybe we give the party a pass on that as well.  But the failure to look out for teachers goes back much further. The last time I remember any serious national attention to the plight of teachers was during Al Gore's campaign.  In May of 2000, presidential hopeful, Al Gore, proposed a $16-billion plan to hire 1 million new teachers and increase teacher pay pay in return for higher standards.  Teachers would get across-the-board raises of up to $5,000 a year and "master teachers" would get raises of up to $10,000. That is real money today, but eighteen years ago, it could have been revolutionary.

Let that sink in.  It has been almost two decades since the party got behind teachers in any major way.  That kind of puts things in perspective.

Reminds me of Rod Tidwell's response at the end of Jerry Maguire when he finally got his big raise. He said of the Cardinals "you're a little slow, but you come around."  They, of course, only came around after he put everything on the line and proved his worth.  At that point, he wasn't begging the Cardinals for anything.  They were begging him to stay.

It strikes me that something very similar is happening with teachers.  They are in the drivers' seat for the first time in a long time.