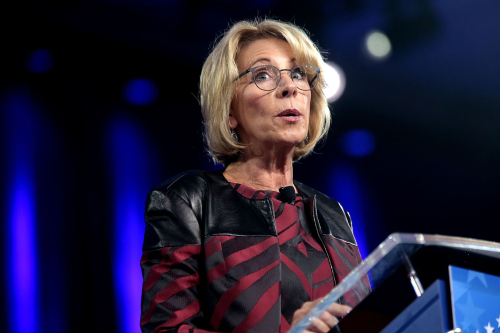 Betsy DeVos sat down with the state teachers of the year on Monday.  Based on Rebecca Klein's report at Huffington Post, several of them gave her a piece of their mind.  One of the most poignant was from a self-described Trump voter from Oklahoma.  He said school choice programs like charter schools and vouchers are draining money from the public schools.  He says that DeVos responded that students enroll in those programs to get out of low-performing public schools.  Then the teacher laid it on the line, saying choice programs are “creating the ‘bad’ schools by taking all the kids that can afford to get out and leaving the kids who can’t behind.”

This line of debate and reasoning has played out a thousand times, never with any satisfying resolution.

A public school advocate critiques choice programs. A choice advocate defends charters and vouchers by critiquing public schools.  The latter is a classic “ends justify the means” claim.  They implicitly concede that even if choice is hurting public schools, the harm is justifiable because the public schools are so bad.  This rarely gets directly challenged.  Instead the debate moves to the emotional level, particularly for families with children "trapped" in “bad” schools.  It would seem unjust, if not imprudent in public discourse, to suggest they remain "trapped."

The pro-choice argument, however, sets up both a false dilemma and false attribution that needs to be called out.  The false dilemma is to assume the only options are to stay in a “bad” public school or depart through a charter or voucher.  Of course, the other option is to improve the public school itself.  The Massachusetts Supreme Court pretty clearly cut through this faulty logic in its recent decision rejecting a challenge to the state’s charter school cap.

The false attribution is to assign causation to “bad” schools.  These schools do not exist in a vacuum.  They don’t just create themselves.  They are creatures of the state.  The state funds or underfunds them.  Staffs or understaffs them.  Segregates or integrates them.  Supports their success or doesn’t.  If, in fact, a school is “bad,” it is because of the policies that states have chosen to pursue in them.  So the cause of parents desire to leave the public schools is not actually the public schools themselves, it is the state's actions.  And it is, ironically, this exact same state actor that choice advocates let off the hook when they ask for school choice rather than school improvement.

This lead to yet another logical flaw—false hope.  They falsely trust the state actor who is depriving children of equal educational opportunities to fix the problem by absolving itself of responsibility. The actual facts of how states are running their traditional public schools versus their charter schools and vouchers reveals that many states’ driving motivation has been to undermine public education not fix it.  And state leaders are willing to do anything necessary behind the scenes to pursue their own partisan agenda.

Reminds me of the line from Usual Suspects: “The greatest trick the devil ever pulled was convincing the world he didn't exist.”