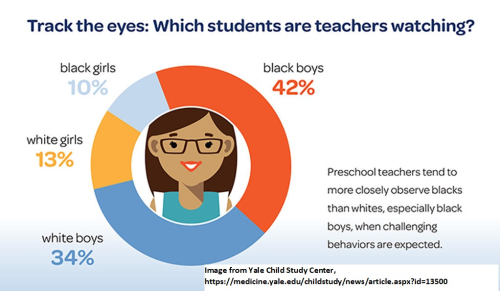 As the Department of Education continues to mull the fate of its guidance on school discipline, it is worth revisiting two of the most high quality studies available to us on the subject.  They offer incredibly powerful evidence that racial bias does, in fact, place a significant role in which students are punished and how harshly.

The vast majority of school discipline studies are observational.  They simply look at the data that schools collect and attempt to draw their best conclusion.  They are not controlled studies, meaning they cannot really know what would have happened under a different set of facts.  In other words, they cannot really know whether an African American student would have been discipline but for race.

Two recent studies resolve this problem.  The first is by Jason A. Okonofua and Jennifer L. Eberhardt of Stanford University.  In Two Strikes: Race and the Disciplining of Young Students, they sought to test “the hypothesis that [racial] disparities [in discipline] are, in part, driven by racial stereotypes that can lead teachers to escalate their negative responses to Black students over the course of multiple interpersonal (e.g., teacher-to-student) encounters.” Eberhardt explained: “The fact that black children are disproportionately disciplined in school is beyond dispute. What is less clear is why.”

To get at this question, they conducted experiments in which they presented current teachers with written accounts of student misbehavior. They did not explicitly indicate the students’ race in the files, but in some records suggested that the student was black or white through their name—for instance, DeShawn versus Greg. In the first round of the experiment, after reviewing the files, teachers were questioned about their perception of the misbehavior, how the student should be disciplined, and whether they thought the student was a troublemaker. In the second round of the experiment, teachers were given the files of students who had misbehaved a second time. This time, researchers asked teachers whether they thought the misbehavior was part of a pattern of misbehavior and might warrant suspension.

In the first round of the experiment, the researchers found some racial bias, but it was less than one might expect. In the second round, however, when the student had engaged in misbehavior twice, racial bias became pronounced. Teachers were far more troubled by the second misbehavior when the student had an identifiably black name. Teachers were more likely to stereotype black students as “troublemakers” and want to discipline them more harshly. They also more often inferred that the second misbehavior was part of a pattern that would likely lead to punishment again in the future.

The second study is by the Yale Child Study Center.  It looks at disciplinary responses at the very earliest stage--preschool.  They recruited participants to complete two tasks. "In Task 1, participants were primed to expect challenging behaviors (although none were present) while watching a video of preschoolers, balanced by sex and race, engaging in typical activities, as the participants’ eye gazes were tracked. In Task 2, participants read a standardized vignette of a preschooler with challenging behavior and were randomized to receive the vignette with the child’s name implying either a Black boy, Black girl, White boy, or White girl, as well as randomized to receive the vignette with or without background information on the child’s family environment."  Here are the major questions they answered and their findings:

Our findings demonstrate that early education staff tend to observe more closely Blacks, and especially Black boys when challenging behaviors are expected. These findings are important to consider given that no behavioral challenges were present in the videos, suggesting, in part, that preschool teachers may hold differential expectations of challenging behaviors based on the race of the child. . . . .

Are behavioral expectations by early educators related to biases regarding boys, Blacks and Black boys?

The nature of these implicit biases appears to differ based on the race of the early educator. When family background information was withheld, White teachers appear to hold Black preschoolers to a lower behavioral standard, whereas Black teachers hold these Black preschoolers to very high standards, pay particularly high amounts of attention to the behaviors of Black boys, and in general tend to recommend harsher exclusionary discipline.

For White early educators, these findings regarding appraisals of severity are consistent with “shifting standards theory,” where an underlying stereotype bias (i.e., Black preschoolers being viewed as more likely to exhibit the challenging behaviors that result in expulsion and suspension) results in a tendency for White teachers to appraise children primarily in contrast with their stereotype (i.e., Black preschoolers compared to expectations for Black preschoolers; White preschoolers compared to expectations for White preschoolers). In other words, perhaps White early education staff tend to hold an implicit bias that Black preschoolers are more likely to engage in challenging classroom behaviors, so a vignette about a Black child with challenging behaviors is not appraised as being unusual, severe, or out of the ordinary resulting in lower behavioral ratings. In the case of the present study, a vignette describing pronounced challenging classroom behaviors, in the absence of any potentially explanatory family background information, may not seem very severe at all for a Black child.

These potentially lower expectations held for children based on race can have detrimental consequences over time, with low expectations, particularly for minority children, being linked to less favorable outcomes. As an alternative explanation, perhaps White educators simply are reluctant to express negative appraisals of performance for students of color. However, if the White participants were simply displaying an avoidance of negative appraisals of Black children on the vignettes, it remains puzzling why those same White participants would display a clear tendency to gaze longer at the Black children and endorse the Black boy at a higher rate during the eye-tracking task.

Are early educators more likely to recommend expulsion or suspension or more days of exclusion for boys, Blacks, and Black boys?

Contrary to hypotheses, child sex and race showed no relationship to early education staff ’s recommendations to expel or suspend, or to the recommended number of days of exclusion. However, Black early education staff recommended more days of disciplinary exclusion across all children than did White early educators. More needs to be learned about the extent to which Black teachers may be more likely to exclude Black children, and specifically Black boys, given that Black early education staff showed tendencies to (a) watch Black Boys especially closely when expecting a challenging behavior, (b) rate the behaviors of Black preschoolers more severely in the absence of family background information, and (c) recommend harsher disciplinary exclusions in general.