Share
Mark Weber and Julia Sass Rubin have released a new report on charter growth and segregation in New Jersey.  As to growth, they find:
•In the 2017-18 school year, enrollment in New Jersey’s traditional and renaissance charter schools surpassed 53,000 students, accounting for 3.6% of the state’s publicly funded student population.
•Charter enrollment has more than tripled over the last decade.
•Almost half of all New Jersey school districts send students and funding to charter schools. The number of such districts has increased from 198 in 2007-08 to 273 in 2017-18.
•In the 2017-18 school year, traditional and renaissance charter schools will receive an anticipated $750 million in funding from New Jersey’s school districts, more than four and a half times the $164 million transferred to charter schools a decade ago.
Their segregation finds, however, are what really caught my eye.  A decade ago the growth was small enough and the disparities muddled enough that charter school supporters could challenge claims that charters were exacerbating segregation.  Helen Ladd's work in North Carolina shows a clear cut racial segregation trend in North Carolina.  Weber and Rubin have been doing the same in New Jersey.  In a 2014 study, they examined Newark's schools and found that segregation and inequality between Newark’s traditional public schools and charters occur on multiple levels. African Americans were increasingly leaving for charters, while Latinos remained. The Latino population in charters was less than half of that of public schools, while African American enrollment in charters was 60% higher than in public schools. Charters were also enrolling significantly lower percentages of higher cost students than public schools. Charters’ low-income, English language learner, special education, and low-income populations were substantially smaller. In short, the type of segregation that would be decried if it was occurring within public schools was occurring between the traditional and charter sectors.
Their, 2018 update looks statewide and finds the same type of problems.  This charter, for instance, shows the difference in special education enrollments between charters and the school districts in which they reside.  in 2016-2017, special education enrollments are 60% higher in the traditional public schools than in charters. 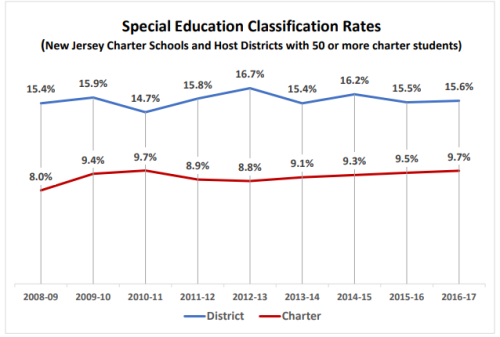 As another one of their charts reveals, the English Language Learner numbers are even worse.  ELL enrollment is more than three times higher in the public schools. 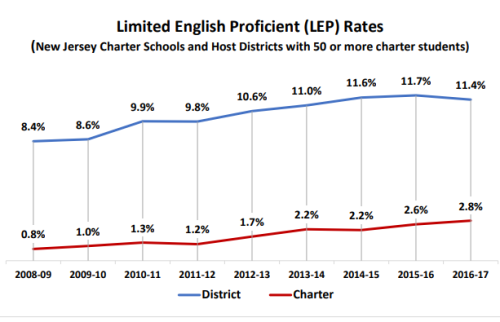 In light of these findings, they recommend that the state change the exist charter school authorization law to require charter authorizers to more seriously consider these issues before issuing a charter to a new school.  In particular, the financial and demographic impacts of the new charter should weigh heavily in the decision to award new charters, as opposed to the current system in which those factors clearly have not.