Do Changing Student Attitudes Shrink Their Own Free Speech Rights?

The title of this essay is more rhetorical than anything.  Laws and courts, not students, shrink or expand free speech rights.  Yet, student attitudes about free speech and other constitutional rights certainly have real world impacts and, in some instances, have incidental effects on legal doctrine.  A new study by Brookings reveals that college students have a relatively narrow view of free speech rights.  Students were asked if the First Amendment protects hate speech and here are their responses: 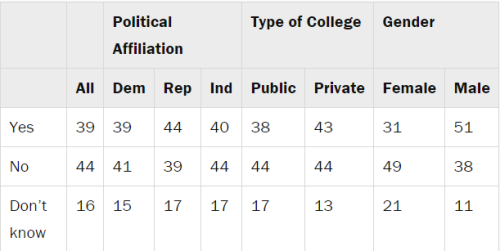 These opinions are having spillover effects on the policies that universities do and do not adopt.  Universities are struggling to balance the interests of free speech against the anti-harassment concerns and student demands that some speakers simply not come to campus.

The Foundation for Individual Rights in Education (FIRE) has made it its business to challenge policies that restrict speech.  That business appears to be growing.  Two years ago, they filed a lawsuit against my University regarding its policies on free speech zones and the investigation of harassment claims, alleging those policies infringe on free speech rights.  Interestingly, that case did not get to the merits.  The University changed its policies and the district court dismissed the case as moot.  Plaintiffs are now appealing the issue as to whether they are still entitled to an injunction against future actions by the University.  This case is not unique.  A quick look at FIRE's docket reveals a number of analogous cases have been filed and are pending in several other jurisdictions.

The point of this post is not to analyze the doctrine but to point out students' role in these shifts.  This free speech shift reminds me of an article Jason Nance authored a couple of years ago about the increase in suspicionless searches in public schools.  His empirical research strongly suggested that schools were regularly violating students' privacy rights.

The Supreme Court defines the scope of students' privacy rights, in part, based upon their reasonable expectations.  So what happens when schools violate students' rights so often that they no longer expect privacy? Does that actually shrink their right to privacy?  If so, Nance's research is extremely troubling.

In the case of free speech, what happens when students become so unable to countenance opposing points of view that they are actually wounded or harmed by those views?  The First Amendment is tougher on this issue than the Fourth, but it warrants consideration because it is true that students have the right to be free from racially, sexually, and other forms of hostile environments.  Thus, schools can restrict speech that crosses that line.  I strongly defend the existence of that line and am sympathetic toward Universities that enforce it appropriately.  Yet, the factual question of when an environment becomes hostile may very well be one that could move based on student attitudes.