The UCLA Civil Rights Project has released a new report on segregation in southern schools.  The press release is below:

Black and Latino students in the South are increasingly isolated in intensely segregated schools and are doubly segregated in schools serving low-income students, according to new research released today by the Civil Rights Project/Proyecto Derechos Civiles at UCLA and the Center for Education and Civil Rights at Penn State.

“While significant gains in integration were made during the Civil Rights era, we are unfortunately seeing a troubling reversal of those trends,” says Gary Orfield, Co- Director of the Civil Rights Project. 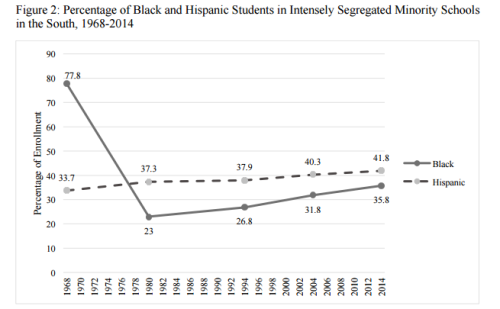 Segregation in the South is double segregation for blacks and Latinos, meaning that they are in schools segregated both by race and by poverty in a region where the share of students poor enough to receive free or subsidized lunches has soared to nearly 60% of all students. Both segregation by race and poverty, research shows, are systematically linked to weaker opportunities and student outcomes.

The report also shows the South is overwhelmingly a public school region with private school students’ accounting for 7 percent of the enrollment.   But the South has recently seen substantial growth of charter schools, which are publicly financed, privately operated schools. The study includes a region wide look at the racial impact of charter schools, which account for about 4.5% of the South’s public school enrollment. The growth of charter schools in the South is outpacing the nation as a whole in terms of the number of students enrolled in charters. The brief shows that charters are more segregated for black and Latino students than the increasingly segregated public schools. Private schools, which receive heavy subsidies through the tax system in Florida and some other states, still enroll more students than charter schools. As a whole, though, southern private schools report shrinking enrollment though they remain disproportionately white.

“Approximately 2 million students in the region are choosing non-district schools—either charter schools, which have higher segregation for black and Latino students, or private schools, which historically in the South have enrolled white students living in more diverse districts,” says Frankenberg, “The substantial share of southern students in various sectors have concerning implications for overall racial and economic integration.”

The report calls on the educators and leaders of the South to recognize the costs of the return to segregation and unequal schooling. The authors say they should commit to school choices that can help promote integration, including a renewed focus on magnet schools and voluntary programs to ameliorate segregation and to prevent its rapid spread into the suburbs. The report calls for serious work on training teachers and staff to more effectively teach students of all three major racial groups and help them to work productively together in schools so that they can work productively together in society. Housing integration work is also critically needed to create racially diverse neighborhoods and communities from which public schools draw their students.

“Our lost progress on segregation for southern black students, and our failure to ever confront segregation for Southern Latino students, has to be a wakeup call for the region’s leaders,” says Genevieve Siegel-Hawley, an associate professor at Virginia Commonwealth University and a co-author of the report. “The good news is that we have historical examples of successful policies and practices here that can help us build a better, more integrated future.

“Sadly the South has been leading the way backward toward a failed system of segregation.   Adding civil rights policies to its schools of choice would be an excellent first step.”

The new report, Southern Schools More Than a Half Century After the Civil Rights Revolution, reviews segregation trends from 1970 to 2014, using the most recent federal data.