Helen Ladd, Charles Clotfelter, and  John Holbein have released a new study on North Carolina's charter schools that will only intensify the debate between charter school and civil rights advocates. A few reports, most notably those by the UCLA Civil Rights Project, have charged that charter schools are more segregated than traditional public schools.  Those reports have been criticized as overstating the matter and unfairly framing the evidence (by comparing charters to dissimilar public school systems).

Ladd's study addresses the issue with more precision by focusing only on North Carolina and looking at the change in charters and public schools over time.  By measuring change over time, Ladd is able to compare charters to themselves and public schools to themselves, mooting claims of unfair comparisons.  This analysis reveals an extremely troubling dynamic.  As the chart below shows, charter schools are becoming "whiter" and traditional public schools more heavily populated by students of color. 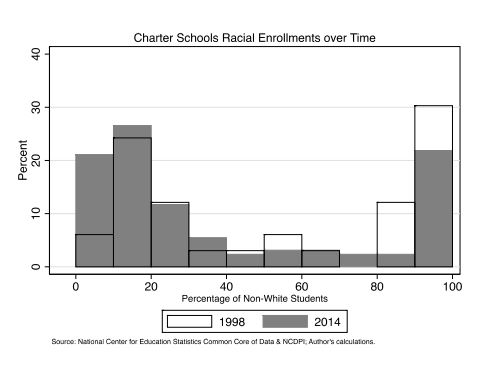 This phenomena has particular salience in North Carolina given its history of relatively integrated public schools.   As I warned two years ago in Charter Schools, Vouchers, and the Public Good, the existence of an "exit option" is extremely dangerous in school systems actively seeking to maintain pluralistic values and integrated student bodies.  An easily available exit option can create the means by which "dissenters" undermine the democratic majority's will and vision for public education. They can, in effect, make a school system more homogeneous by leaving it and, thus, leave it lease able to diversify.

North Carolina is, by no means, perfect, but it has probably tried harder than any other state to desegregate its schools, including by voluntary measures.  Most notably, Wake County has been hailed as a national leader for its past policies' limiting the concentration of poverty in any given school to forty percent.  This plan, however, has been increasingly controversial in recent years, with radical shifts in the school board makeup.  Thus, based on my prior concerns, it is no surprise that North Carolina may be presenting as a poster-child for worst case scenarios for charter schools and resegregation.  Ladd's work shows an particularly disturbing trend of predominantly white schools, which are significantly less integrated than the system from which they are exiting, popping up in Wake County and other similarly situated counties.