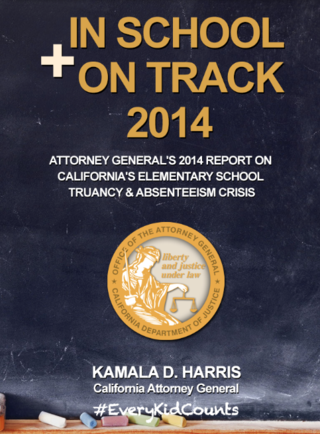 Last week California’s Attorney General’s office released a report, In School + On Track 2014,  discussing high rates of absenteeism in  the state’s elementary schools.  Contributing factors in the problem of absenteeism, the report notes, are poverty and racial disparities in school discipline. Almost 90% of the elementary students with the most severe attendance problems—those who miss 36 days or more of school per year—are estimated to be low-income. Further, the report notes that racial differences in discipline start early: African American children account for over 40% of all preschool students suspended at least once, although they represent only 18% of preschool enrollment.  The Attorney General’s report contains the following key findings:

High mobility students are at greater risk in California given the current lack of statewide infrastructure for tracking attendance. … [S]tudents’ attendance histories are not readily available to a receiving school when a student moves into a new district. Instead, records stay in local siloes, with no modern system to integrate and share information. The lack of information on students’ previous attendance patterns severely hampers prevention and early intervention efforts for students with historically poor attendance, including those the Local Control Funding Formula is expressly designed to assist.

The attendance crisis disproportionately affects disadvantaged students—from higher rates of attendance to greater numbers of missed days of school due to suspensions.