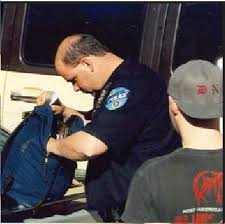 Florida’s appellate courts recently upheld two school search cases finding that backpack searches for guns were reasonable. In R.M. v. State, a 6th grade student described an upperclassman (but did not know his name) who had shown a gun to students in the middle-school’s bathroom. A student fitting the description, R.M., was seen by the school resource officer and brought to the principal’s office. The principal questioned R.M. who admitted that he had a handgun in the bag. Later, the principal learned that the teacher believed that a student other than R.M. matched the description. Florida’s Third District Court of Appeals upheld an adjudication of juvenile delinquency against R.M., finding that the school officials’ actions were reasonable because they knew the informant and had the suspected student’s physical characteristics. R.M. v. State, No. 3D13-1245, 2014 WL 20628 (Fla. Dist. Ct. App. Jan. 2, 2014). These two factors and the seriousness of the contraband, a handgun, weighed in favor of the school being allowed to question R.M. and search his belongings.  While students have privacy interests in items that they bring to school, the U.S. Supreme Court has held in New Jersey v. TLO, 469 U.S. 325 (1985), that students’ expectation of privacy must be weighed against schools’ interest in maintaining order and protecting students from violence. A school’s interest in protecting students promoted a second Florida court to uphold a juvenile adjudication for a gun brought to school, although the school relied on an anonymous tip to search the student’s property. In K.P. v. State, No. 3D12-1925, 2013 WL 6800973 (Fla. Dist. Ct. App. Dec. 26, 2013), a school resource officer searched a student's book bag at school, based upon an anonymous tip that the student was carrying a firearm. The Florida court first noted that the U.S. Supreme Court has held that a search based on an anonymous tip without independent corroboration violated the Fourth Amendment. J.L. v. Florida, 529 U.S. 266 (2000) (information in an anonymous tip that a black male at a bus stop was carrying a gun was insufficient to justify a public stop and frisk). However, the Court in J.L. stated that when a government interest was more immediate and substantial, such protecting school students, an otherwise unjustified search could be permissible under the Fourth Amendment. School investigations are “special need” searches that justify dispensing with Fourth Amendment’s warrant and probable-cause requirements. The Florida court found that the school’s interests in safety, given recent incidents of school violence throughout the country, outweighed K.P.’s privacy interests. Thus, even though there was no reliable basis for individualized suspicion in K.P.’s case, the school officials did not violate the Fourth Amendment by searching his bag.