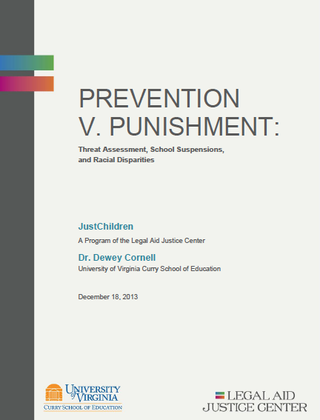 A new report by the University of Virginia’s Curry School of Education and the Legal Aid Justice Center show racial disparities in school suspension in Virginia and that reformed  threat assessment standards used in 35 schools reduced that racial discipline gap. Zero-tolerance school discipline policies have come under scrutiny for many reasons, prominently because across the board, black students get suspended at up to twice the rates of white students and because suspensions consistently correlate with “disengagement, truancy, poor academic performance, and ultimately, dropping out of school.” (Curry & Lovegrove, 2012). Zero tolerance policies eliminate judgment calls, but also allow little room for common sense appraisals of misbehavior, so students have been suspended for yelling, “firing” a gun with their fingers, and bringing plastic knives to school.

To reduce the negative educational outcomes of school suspensions, UVA’s Curry School of Education created the Virginia Student Threat Assessment Guidelines. The Guidelines were  modeled on the Secret Service’s methods to assess when a person actually poses a threat (as opposed to having made one). With the caveat that the school’s faculty also authored the standards, the study finds that schools using the Virginia Guidelines have lower rates of school suspensions, including a smaller racial discipline gap among black males. The study notes:

For more, click the image or read the study here.