More on the Economics of Higher Education Admission Policies 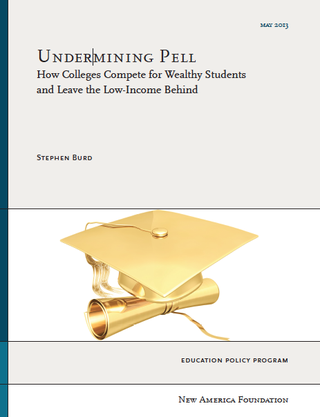 Following up on Aaron Taylor's post last Wednesday about the economics of higher education admissions, an article in last week's The Atlantic, The Federal Student Aid Program Is Breaking Its Promise to the Poor, highlights Aaron's concerns that wealth can be a "proxy for merit in higher education admissions."  The subtitle to the Atlantic article sums up the point: "[s]tudents from households with more than $100,000 in income received more federal aid in recent years than those from households with less than $20,000 in income." According to NCES data, in 2007-2008, students from households with more than $100,000 in income received $8,470 in federal aid versus the $8,060 received by students fom households with less than $20,000 in income. While those numbers  may be no news flash to educators in higher ed, the article notes how far the federal student aid program has drifted from President Lydon Johnson's aim in the Higher Education Act of 1965 to help lower income students attend college. Today, colleges use federal student aid to get the new desireables: students that can pay most of their own way and are attracted by scholarships that will allow them to graduate debt-free. As Aaron noted, for many institutions, "merit" aid is given to those with the ability to pay for a slightly reduced tuition. Federal student aid is perversely used in some cases to disincentivize lower income students from enrolling. One way is an admission procedure called admit/deny, which is, an executive at an enrollment firm says, "when you give someone a financial-aid package that is so rotten that you hope they get the message, ‘Don’t come.’”

The Atlantic article is informed by a report (pictured left)  by the New American Foundation called Undermining Pell: How Colleges Compete for Wealthy Students and Leave the Low-Income Behind. The report in PDF is here.