The Unequal Impacts of Federal Cuts on Public Schools

The American Association of School Administrators (AASA) has released a report detailing the unequal effects of federal budget cuts on public schools.  While all schools and states have suffered cuts, the cuts have been relatively minimal in some places and enormous in others.  Federal Money, for instance, only makes up 5.4% of New York State's education budget, while it makes up 24.8 in Mississippi.  Yet, because much of federal money in based on poverty, there are districts within New York that are more seriously affected as well; the rest are almost entirely unaffected.  In short, flat across the board cuts have very disparate effects on schools.  AASA's map below shows this drastic unevenness. Interestingly, those cuts have been most heavily felt in the heart of Republican party territory, the southeast, due to its high levels of poverty.  (You will notice other isolated areas of concentrated impact going west.  This is due to native american populations, for which the government allots special funding.)  This map also demonstrates why progressive funding of concentrated poverty should be a bi-partisan agenda in Congress, as Republican states stand to benefit the most, but it is not. 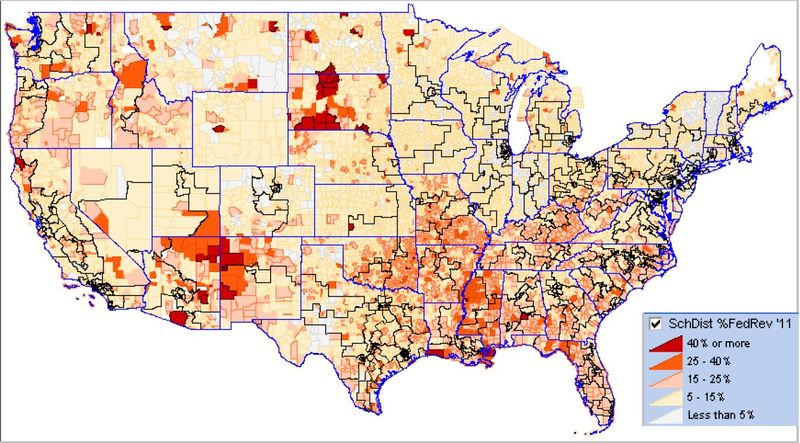