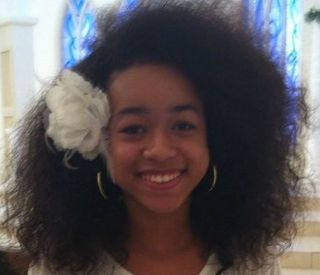 Derek and Danielle Holley-Walker discussed the Ohio and Tulsa hair cases last week, and yesterday, blogs were buzzing about Orlando's Faith Christian Academy threat to expel a 12-year-old for having long natural hair. The student, Vanessa VanDyke (pictured left) was given one week to decide to whether cut her hair or leave Faith Christian Academy, a school that she has attended since third grade. VanDyke's hair has been long and natural all year, but recently became an issue when she complained about students bullying about her hair. School administrators turned the complaint back on the student by saying that her natural hair was a distraction that violated the school's dress code. The school dress code has the following statement about hair: “Hair must be a natural color and must not be a distraction," and cites "mohawks, shaved designs and rat tails" as prohibited hair styles. The problem with African-American natural hair is that it is just that--it is not a "style," unlike the critiques of braided and locked styles that courts have made in employment cases.

UPDATE: 12/4/2013: The school has withdrawn its threat to expel the student, but school administrators told a local tv station that it was standing by its request for the student to change her hairstyle, saying “we’re not asking her to put products in her hair or cut her hair. We’re asking her to style her hair within the guidelines according to the school handbook.”

What a joke. I don't get the point of trying to make sure people's hair styles are "conservative" and all that. Her hair naturally does that, why do they have to discriminate. It's wild, I think all professors should just take a trip through hair design school and learn.