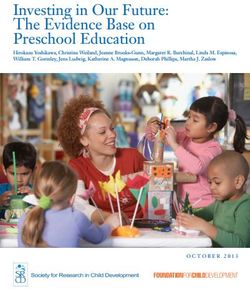 The Society for Research in Child Development just released its new report, Investing in Our Future: The Evidence Base on Preschool Education.  The report does not offer any striking new findings, but it does an excellent job of presenting pre-k research in a very reader-friendly manner. Reader-friendliness, however, was not the enemy of nuance.  The report focuses on specific studies and specific limitations.  For instance, it indicates that, while pre-k produces impressive short-term academic improvements in math, literacy and language, studies often find the gains fading across time in later grades, at least as measured by standardized tests. This problem has been used by opponents to argue that pre-k is not a good investment.  The report provides a powerful rejoinder.

First, the fact that initial gains do not always show up on later tests does not mean that the gains are lost.  It may mean that the gains are not being properly measured.  Later standardized tests may be testing student knowledge differently or later schools have moved to a different method of instruction and curriculum.  Even if the tests were valid measures of learning, which many question, I would say that different methodologies and tests are both are highly possible explanations for the purported "fading of pre-k gains," particularly given the constant churn in tests and standards in recent decades.

Second, the hypothesis of the first point is strongly supported by the fact that students who were in pre-k programs do show significant educational and life outcomes on measures other than standardized tests:

We do not fully understand why the gains of pre-k appear to fade in later grades, but it programs also produced striking results for criminal behavior; fully 60-70% of the dollar-value of the benefits to society generated by Perry Preschool come from impacts in reducing criminal behavior. In Abecedarian, the Investing in Our Future: The Evidence Base on Preschool Education treatment group’s rate of felony convictions or incarceration by age 21 is fully one-third below that of the control group. Other effects included reductions in teen pregnancy in both studies for treatment group members and reductions in tobacco use for treatment group members in Abecedarian.

Added to this impressive criminal justice, pregnancy, and tobacco results are positive effects on high school graduation and employment after high school.  The study also points out that, whatever might be said of pre-k in general, it has the strongest impact on the neediest students.