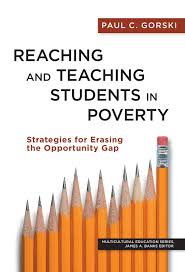 On valuing education, he says this stereotype is an assumption based on less parental involvement at the school building itself by low-income families, but he points out that the inability to be at school is caused by job, transportation, and other barriers poor families face, not a lack of interest.  He says there is no information to infer that they actually value education less.  The laziness stereotype is easily debunked by the fact that many poor families work more hours and jobs than other families.  They just make less money.  On substance abuse, he says data shows that wealthier families actually have a higher rate of alcohol and drug abuse than poor families.  They, of course, also have more money with which to indulge.

The linguistic deficient, however, was the most interesting.  He does not contest that lower income parents may have less formal vocabularies, which also manifests itself in their children’s oral communication.  He does contest that they are less complex or necessarily eqaute to ignorance.  He points to evidence that indicates oral vocabularies are not as closely linked to reading and writing vocabularies as one might think.  In short, a child’s oral linguistics are not a limit on their ability to learn to read.  This makes sense because, after all, reading is new to all kids, regardless of how well they might speak.  Gorski acknowledges that low-income students do tend to start school with fewer reading skills than other students, but he argues this is a function of difference in access to quality pre-k educational opportunities, not necessarily their parents’ communication skills.  His debunking of the bad parent stereotype is largely intertwined with the previous four points.

So why are these stereotypes so prevalent and where do they come from?  Part of it, he says, is our

mental habit to use anecdotal evidence to reinforce existing stereotypes.  For instance, because there is a general stereotype that poor people are lazy or drug users, when we meet a poor individual who is lazy or a drug user, we say “I guess the stereotype is correct” or “poverty does cause drug use.”  But when we meet a lazy or alcoholic wealthy person, we do not assume those traits have anything to do with his social status.  Rather, we seem them as an individual characteristic. The effect of the stereotypes can be devastating.  “In the end, our understandings of poverty and our attitudes toward poor families play an enormous role, and perhaps the most enormous role, in how we see and treat our low-income students, not to mention the lengths to which we will or will not go to advocate for them and their educational rights. . . . Stereotypes can make us unnecessarily afraid or accusatory of our own students, including our most disenfranchised students, not to mention their families. They can misguide us into expressing low expectations for poor youth and their families or to blame them for very the ways in which the barriers they face impede their abilities to engage with schools the way some of us might engage with schools.”

A long excerpt from the book is available here.