Law Enforcement Comes Out in Support of Obama's Pre-K Program: It Saves Money and Reduces Crime 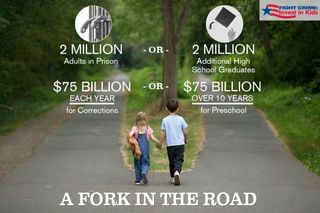 A national law enforcement organization just released a report titled, “I’m the guy you pay later,” finding that President Obama’s proposed pre-kindergarten program would “reduce the number of people who are incarcerated nationwide by 200,000 every year and lead to $75 billion in cost savings over 10 years.”  More than 1,000 police chiefs, sheriffs, and prosecutors also signed a letter urging Congress to enact the President’s program.

As Los Angeles County Sheriff Leroy Baca says, “Right now we’re at a fork in the road with a simple choice – pay a reasonable amount of money so states can get more at-risk kids in quality preschool programs today, or pay guys like us a lot more to deal with the millions who will be incarcerated in the years ahead.”

Law enforcement’s support for the program apparently reaches beyond just those who are part of the organization.  A Mason Dixon poll of law enforcement leaders conducted this summer showed a large majority in support of expanding pre-kindergarten.  Likewise, another national poll showed that 70 percent of all registered voters “favor providing preschool to all low- and moderate-income 4-year-olds and expanding home visiting and parent education programs and early education and care for infants and toddlers. Support was strong across the political spectrum, including 60 percent of Republicans and 64 percent of Independents.”

The bottom line now is that the public, the President, civil rights advocates, educators and law enforcement all agree.  Outside of those who are just skeptical of government spending and programs as a general principle, one is hard pressed to find any constituency that is against expanding pre-k.  As I posted earlier this summer, even Wall Street is willing to put its money behind it.  This all begs the question: where is Congress?