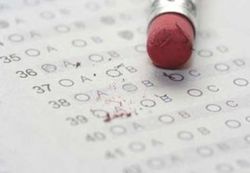 As an Atlanta native, I have been following the indictments this spring in the Atlanta public schools cheating case, which USA Today and CNN call the nation's largest school cheating scandal. Thirty-five educators in the Atlanta Public Schools system (APS), including former school superintendent Beverly Hall, were indicted in March for participating in a conspiracy to cheat on standardized tests such as the Criterion Referenced Competency Test, which were used as benchmarks showing student proficiency. Showing progress towards student proficiency in reading and math are required by the No Child Left Behind Act. The APS cheating conspiracy was motivated, state investigators found, by federal incentives that the educators would receive, including cash, when Atlanta's students met the proficiency standards mandated under the No Child law.  The APS officials and teachers are accused of cheating by giving students essay test questions in advance, assisting students during tests, and having grade-changing parties to erase and make students' wrong test answers correct. State investigators have found that teachers in 44 of the 56 Atlanta schools examined had done some form of cheating on federal tests, according to a 300-page investigative report given to Georgia Governor Nathan Deal in 2011.

Fulton County District Attorney Paul Howard Jr. has charged the educators under Georgia's Racketeer Influenced and Corrupt Organizations Act (RICO) statute, O.C.G.A. § 16-14-4(c). The educators are charged under the Georgia RICO section that makes it unlawful to "conspire or endeavor to participate in an enterprise through a pattern of racketeering activity while being employed by, or associated with, the enterprise"). Like the federal statute it was modeled on, Georgia RICO was intended to prosecute crime syndicates, but prosecutors gradually began using RICO for public corruption cases such as the APS cheating scandal. Georgia's RICO law differs from the federal racketeering statute because Georgia law allows a defendant to be convicted for an “endeavor” to participate in a RICO violation (giving Georgia prosecutors a theory of liability that the federal statute does not have) and broader definitions of "pattern of racketeering activity" and "enterprise," Michael P. Kenny and H. Suzanne Smith notes in their article, A Comprehensive Analysis of Georgia RICO. Both RICO variations will help prosecutors. But while prosecutors can make the case for the APS educators' bad behavior, it may be more of a challenge to prove that the defendants were organized, however loosely, toward achieving a common goal to cheat—beyond simply working for the APS and not wanting to lose their jobs. In a large scandal with many defendants, Howard will have to link the criminal acts with some sort of collective purpose, which  usually requires a central figure directing the organization, notes RICO expert Jeffrey E. Grell in an interview with the Associated Press. The central figure here will be former Superintendent Hall. District Attorney Howard's job now is to convince a jury that Hall's alleged acts of whistleblower retaliation, firings, and document shredding shows her control and direction of the cheating scheme.