From Lionel Smith, and posted with his permission:

It is with a heavy heart that I announce the passing of our colleague and, for very many members, our dear friend, Steve Smith, on 29 November 2022, aged 64. 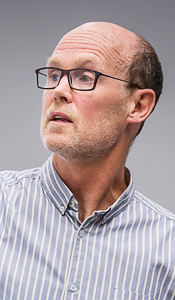 Steve’s career was a record of excellence. Following a BA in political science from Queen’s University and an LLB from the University of Toronto, he clerked in 1989-90 for Brian Dickson, Chief Justice of the Supreme Court of Canada. He went on to conduct doctoral research at Balliol College, under the supervision of Joseph Raz, and was then appointed a law fellow at St. Anne’s College. He joined McGill’s Faculty of Law as an associate professor in 1998, and was appointed James McGill Professor in 2009.

His book Contract Theory (2004) includes an analytical discussion and typology of different accounts of private law, which is widely cited by anyone working in the area of private law. Among a huge range of papers ranging across all areas of private law and private law theory, his paper ‘Duties, Liabilities and Damages’ (2012) 125 Harvard LR 1727 is regarded as seminal in debates about the nature of the law’s responses to wrongdoing in private law, and helped to lay the foundations of Steve’s magnum opus Rights, Wrongs and Injustices: The Structure of Remedial Law (2019). This book was the culmination of over a decade of sustained, original scholarship on fundamental private law theory, touching on all aspects of private law but especially on the articulation of the law of remedies as a distinct field of law with its own characteristic governing principles. The book, and the scholarship that led to it, have been influential all over the world. Steve also published Atiyah’s Introduction to the Law of Contract, 6th ed (2005), making him a member of the very small group of authors with more than one title in the Clarendon Law Series.

His scholarly contributions were recognized by a Killam Research Fellowship, which he held during 2009-11, and by his election as a fellow of the Royal Society of Canada (2020). He held visiting appointments at both Cambridge and Oxford, as well as at the Universities of Queensland and Toronto. In 2017 he was awarded the Law Foundation of New Zealand Distinguished Visiting Fellowship, in which the Fellow visits all of the law faculties in that country.

Those who knew Steve know how much more to him there was than his outstanding academic achievements. He was devoted to his family. He was wise, thoughtful, generous, funny, and fun. He was an extraordinary athlete; Mr. Justice John Sopinka used to organize a squash tournament with the law clerks at the Supreme Court of Canada, and Steve was the only one who could beat the judge. He was also an outdoorsman who liked nothing better than to disappear into the wilderness for a few days in a canoe; the real wilderness, beyond any shop, road, or even cellphone signal. He was very gifted with his hands as well as with his mind, and over the years he singlehandedly renovated the family’s large old house in Montreal West, including wiring, plumbing, and carpentry, from the basement to the third floor.

Over the last several years of illness he was of good cheer and continued to engage in scholarly debates. When some of his friends proposed a collection of essays in his honour, Steve wanted nothing more than that each contribution would engage with some argument that he had made in print, and he enthusiastically made a list of these arguments for the benefit of the contributors. He was not interested in hommages.

Steve leaves his spouse, Sue Law, and their children, Jamie, Michael and Jennifer Law-Smith. They will be in the thoughts of Steve’s many friends and colleagues all over the world as they mourn the passing of an extraordinary person.