Two pieces of news that I came across this week highlight just how broken college sports is.  First, as Zac Al-Khateeb reported here in The Sporting News (in a story first reported in The New York Times' The Athletes, the University of Texas at Austin spent $280,000 on a recruitment trip involving Arch Manning and some other students.  The system disgusts me so much that I can't be bothered to keep up with the current state of things.  I don't know whether players are allowed to be paid yet. If they are not allowed to be paid, well, this story suggests that they absolutely are being paid.  And if they are being paid, well, pay them to play, not to have dinner at the local steakhouse with their families.  But please, do start paying them and do it soon, so that the entire corrupt system can come crashing down under the weight of its own excess, greed, and unreality. 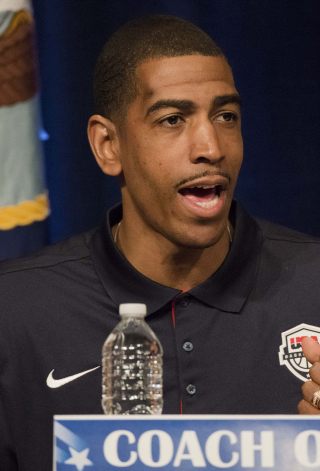 Second, Billy Witz reports here in the New York Times, that the University of Connecticut (UConn) has agreed to a $3.9 million settlement with its former coach Kevin Ollie (right), who was fired for cause in connection with an NCAA recruiting violation investigation that ultimately resulted in the team being placed on probation for two years.  An arbitrator had awarded Mr. Ollie, who was found to have skirted NCAA rules, the $11 million remaining on his contract at the time of his termination.   UConn had originally responded by calling that award "nonsensical."  The fact that Ollie negotiated down from an arbitral award suggests that he was less than 100% confident that it would hold up, but who knows what absurd terms were in the contract.  Paying coaches millions of dollars to head teams made up of talented athletes who get paid nothing and who are supposed to be attending college rather than training for professional sports is what is really non-sensical.

NO OTHER COUNTRY IN THE WORLD DOES THIS!!!  And it does not pay for itself.  Not even close.  This article from Tom Dart in The Guardian about the University of Houston has the same message as every other truthful article about college sports: "A handful of athletics departments, such as Texas (which has newly renovated one end of its football stadium at a cost of $175m) are profitable. Many others, such as Houston, subsidise sports programmes through funds from the university’s wider budget, mandatory student fees of hundreds or even thousands of dollars each year, and donations."

When sports programs do well, they bring in money that is used on sports.  When law schools do well (and many make a profit for their universities most years), they contribute to the university's overall budget.  Instead of painting their faces, attending tail-gating parties, and screaming for three hours on a Saturday, undergraduates should be bringing snacks and coffee to the law libraries and encouraging the students who are training to become the lawyers of tomorrow.  Their tuition dollars are funding that climbing wall in your college gymnasium today.