Borat Drafts Better Releases than the State of Florida

Long-time fans of the Blog or of Borat will recall that Sacha Baron Cohen has been sued repeatedly by the people who appear in his films.  We memorialized the release from the original Borat movie here (with links to prior posts).   A second rounds of posts begins here and ends here.  Mr. Cohen escaped liability every time because of an iron-clad release (left) that all of the victims of his comedic stylings signed before filming began.

As Eduardo Medina and Remy Tumin report in The New York Times here, some of the Venezuelan migrants who were put on a plane in Texas and sent to Martha's Vineyard are suing Governor DeSantis and others for what they are alleging was a "fraudulent and discriminatory scheme."  Never mind that Florida's governor for some reason spent taxpayer money (the complaint says that chartering the flights cost $615,000) to send fifty migrants who were not even in Florida to Massachusetts.  Never mind the horror of exploiting fifty human beings, who may be asylum seekers, for a political stunt.  The complaint alleges intentional infliction of emotional distress and false imprisonment.  Others have alleged kidnapping, and human trafficking.  As Julia Shapero  reports in The Hill here, a democratic lawmaker is suing to enjoin Governor DeSantis from any more such flights.

Never fear, whenever people attack the GOP, Jonathan Turley is there! Professor Turley argues here that the migrants have signed a waiver.  He thinks that the migrants will have to show that the waiver was secured by trick or fraud.  He provides a blurry image of the "official consent" document.

There are problems.  First, although the document is bilingual, the Spanish translation of the English portion of the document is incomplete.  Second, unlike the Borat release, which specifically named and released the filmmakers from all of the claims brought by plaintiffs, the Florida release simply says that the migrants will hold defendants "harmless of all liability arising out of or in any way relating to any injuries and damages that may occur during the 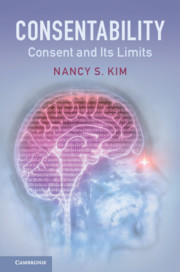 agreed transport to locations outside of Texas."  The Borat release specifically waives claims to fraudulent inducement.  This release does not, and it may be couched in such broad terms as to be unenforceable as a matter of public policy.  And there is plenty of evidence of fraudulent inducement and (thus far) not much evidence on the other side.  Third, the Borat filmmakers represented that plaintiffs would appear in a "documentary-style film."  They did appear in a documentary-style film.  So the fraudulent inducement claim was weak in any case.  Time will tell whether any of the representations that Governor DeSantis's agents made were remotely true.  Finally, the stakes here are much higher than being filmed in a fake documentary.

This may be occasion to rethink the law of releases.  Contributing blog editor Nancy Kim has written a book, Consentability (right), about problematic exchanges in which it is just not reasonable to construe people as having given meaningful consent.  This seems like such an area.

Governor DeSantis denounces the suit as "political theater."  Wait.  The Florida man who authorized and paid for sending 50 Venezuelan migrants from Texas to Martha's Vineyard calls a lawsuit political theater?  Is he saying political theater is a bad thing?  So confused.